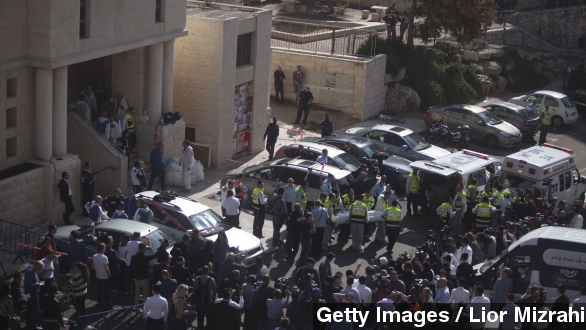 At least four Israelis are dead and six other people wounded after two armed Palestinian men attacked worshippers at a Jerusalem synagogue.

According to multiple outlets, the Palestinian men wielded knifes, axes and guns as they rushed a synagogue in Har Nof, a mostly Orthodox Jewish neighborhood, in the Israeli capital Tuesday morning.

Police reportedly shot and killed both attackers inside the building shortly after their rampage.

The injured victims were all rushed to nearby hospitals. And local officials have called the incident a "terrorist attack."

Israeli Prime Minister Benjamin Netanyahu said the country will "respond with a heavy hand" to the attacks and accused the militant group Hamas of fueling the violence.

And local outlet i24 News reports a Hamas spokesperson as saying, "the terror attack was revenge for the 'killing' of the Palestinian bus driver."

That's referring to an incident in Jerusalem Sunday, when a Palestinian driver was found dead inside a bus. Police say it was a suicide, but some Palestinians disagree and claim he was killed by Jewish attackers.

As for this most recent attack, the conditions of the injured are currently unknown.