Four Arrested In Connection With Death Of Journalist Lyra McKee 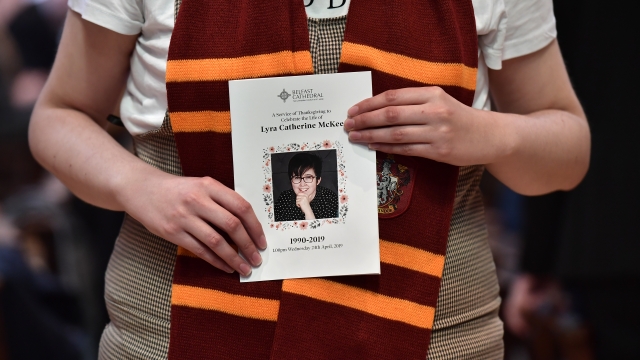 SMS
Four Arrested In Connection With Death Of Journalist Lyra McKee
By LeeAnne Lowry
By LeeAnne Lowry
May 9, 2019
Two men and two teenage boys are being questioned about the shooting during a riot in Northern Ireland.
SHOW TRANSCRIPT

Four people were arrested and four houses searched Thursday morning in connection with the death of journalist Lyra McKee in Northern Ireland.

These new suspects — two men and two teenage boys — are being detained for questioning.

McKee, a 29-year-old investigative journalist, was shot last month while standing next to a police vehicle during a riot in Londonderry. The riot broke out after police started searching houses in the area, looking for firearms and explosives that the The New Irish Republican Army was storing there.

The New IRA has been described as a militant republican group that believes Northern Ireland should not be under British rule.

The group admitted responsibility but said McKee's death was an accident. It blamed police for "provoking" the crowd and told its volunteers to "take the utmost care in future when engaging the enemy."

Police previously arrested and released three other people without charge.