Found Cleaning Up After Hurricane Ian: A Stranger's Memories 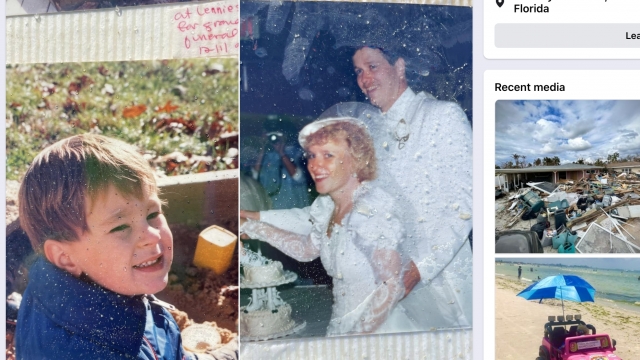 A homeowner cleaning up after Hurricane Ian found an album of a stranger's photos.

One mystery couple’s special day will forever be woven into another family’s less joyful memories.

Hurricane Ian rocked neighborhoods in Fort Myers Beach less than two weeks ago. Annette Wenger was in Wisconsin, and drove down a week later to survey the damage to their dream home on the water.

"Monday, we got up early, and we started our cleanup," Wenger said. "And you go in, grab stuff, bring it out, throw it out. And all of a sudden, it's like, here's a book."

"The first picture I saw was a wedding picture of this couple. And I think they're cutting the cake. And you know, they're older pictures. So they probably don't have copies like we do today where we keep them on our phone and we send them to Walgreens or something like that. And then there's a picture of a little boy just sitting playing in a sandbox."

Wenger posted a few of the pictures to a Facebook group online, hoping somebody would recognize anyone in the photos. No luck yet.

You can find so many stories like this one on social media posts: A virtual lost and found of sorts, trying to connect people with tokens of what once was.

"The main thing that I pulled from this is how helpful everyone has been," Wenger said.

There’s a lot of cleanup left, but now finding this album’s owners is part of Annette’s mission.

“I have somebody’s memories. And I want to give them back to them. I know how much my pictures mean to me and if I would lose them… I hope somebody would try to find me," Wenger said.