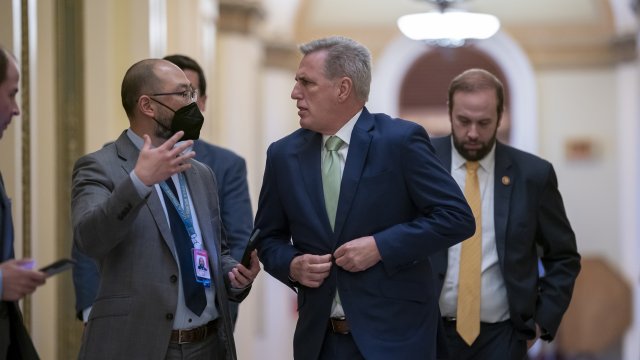 Former Trump advisers Peter Navarro and Dan Scavino were held in contempt of Congress for their monthslong refusal to comply with subpoenas rendered by the House committee's investigation into the Jan. 6 attack on the U.S. Capitol.

The two men on Wednesday became the latest members of former President Donald Trump's inner circle to face legal jeopardy as the select committee continues its more than nine-month-long probe into the worst attack on the Capitol in more than 200 years.

The near-party-line 220-203 vote will send the criminal referrals for Navarro and Scavino to the Justice Department for possible prosecution.

The contempt action followed hours of raw debate on the House floor as Republicans stood by Trump and charged that Democrats were trying to politicize the attack on the Capitol by his supporters.

House Republican leader Kevin McCarthy accused the Jan. 6 committee of "criminalizing dissent," defended Scavino as a "good man" and lobbed harsh criticism at members of the committee, some by name. "Let's be honest, this is a political show trial," McCarthy said.

Democratic Rep. Jamie Raskin of Maryland, among the nine members of the Jan. 6 panel, noted that the committee has two Republicans, including Liz Cheney of Wyoming. He added that the purpose of the floor vote was to make clear that "open contempt and mockery for this process, and for the rule of law" will not be allowed by the chamber.

"I mean, it is just amazing that they think they can get away with this," the three-term lawmaker told reporters about Scavino and Navarro as the debate raged on Wednesday.

Cheney and Illinois Rep. Adam Kinzinger, who is also on the select committee, were the only Republicans who voted in favor of the contempt charges.

While pursuing contempt charges may not yield any new information for the Jan. 6 committee — any prosecutions could drag for months or years — the vote Wednesday was the latest attempt to show that witnesses will suffer consequences if they don't cooperate or at least appear for questioning. It's all part of an effort to claw back legislative authority that eroded during the Trump era when congressional subpoenas were often flouted and ignored.

"This vote will reveal to us who is willing to show tolerance for the intolerable," Majority Leader Steny Hoyer of Maryland said on the floor, directing his comments to Republicans across the aisle.

Raskin and other Democrats made their case that Scavino and Navarro are among just a handful of individuals who have rebuffed the committee's requests and subpoenas for information. The panel has interviewed more than 800 witnesses so far.

In the last week alone, the committee scored two of those interviews from Trump's daughter Ivanka Trump and her husband, Jared Kushner. Their virtual testimonies are the closest lawmakers have gotten to the former president.

Members of the panel said Kushner's testimony last Thursday was helpful. Ivanka Trump, who was with her father in the White House on Jan. 6, was questioned for eight hours Tuesday as congressional investigators tried to piece together her father's failed effort to delay the certification of the 2020 election results.

The main focus of the committee's outreach to the former first daughter surrounds a telephone call they say she witnessed from her father to pressure then-Vice President Mike Pence to reject President Biden's 2020 election win as part of his ceremonial role overseeing the electoral count. Pence rejected those efforts.

Democratic Rep. Bennie Thompson, the chairman of the committee, highlighted Ivanka Trump's voluntary cooperation with the committee as opposed to Scavino and Navarro's defiance. Raskin said Scavino has "refused to testify before Congress about what he knows about the most dangerous and sweeping assault on the United States Congress since the War of 1812."

The committee says Scavino helped promote Trump's false claims of a stolen election and was with him the day of the attack on the Capitol. As a result, he may have "materials relevant to his videotaping and tweeting" messages that day.

A lawyer for Scavino did not return multiple messages from The Associated Press seeking comment.

Navarro, 72, a former White House trade adviser, was subpoenaed in early February over his promotion of false claims of voter fraud in the 2020 election that the committee believes contributed to the attack.

Navarro cited executive privilege when declining to testify, saying the committee "should negotiate this matter with President Trump." He added, "If he waived the privilege, I will be happy to comply."

But the Biden administration has already waived executive privilege for Navarro, Scavino and former national security adviser Michael Flynn, saying it was not justified or in the national interest for them to withhold their testimony.

Executive privilege was developed to protect a president's ability to obtain candid counsel from his advisers without fear of immediate public disclosure, but it has limits. Courts have traditionally left questions of whether to invoke executive privilege up to the current White House occupant. The Supreme Court earlier this year rejected a bid by Trump to withhold documents from the committee.

The vote Wednesday will be the third time the panel has sent contempt charges to the House floor. The first two referrals, sent late last year, were for former White House chief of staff Mark Meadows and former Trump ally Steve Bannon.

The contempt referral against Bannon resulted in an indictment, with a trial set to start in July. The Justice Department has been slower to decide whether to prosecute Meadows, much to the frustration of the committee.

"It's the committee's hope that they will present it to a grand jury," Thompson told reporters Tuesday. "Obviously, the Meadows case is still outstanding. We don't really know where that is, other than we've done our work."

He added, "The firewall goes up from our standpoint, and DOJ uses its systems to take it from there."

Thompson suggested more witnesses could still be held in contempt in the weeks ahead even as the committee looks to wrap up the investigative portion of their work in the next two months.

A conviction for contempt of Congress carries a fine of up to $100,000 and up to a year in prison.