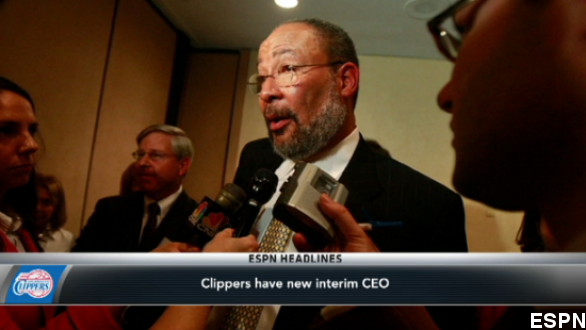 ​With its owner accused of discrimination and banned for life, the Los Angeles Clippers finally have a new boss. On Friday, the NBA appointed businessman Dick Parsons as new team interim CEO.

Parsons is a noted basketball fan, having played in college. Talking to a league reporter, he said he could help the Clippers decide "do we go up, do we go down, puts his arm around the people who are involved and tell them that they're appreciated. I hope I can do that."

An ESPN commentator commended the move saying this is the first step in moving on from Sterling's ownership.

“Really, the league could not have made a bigger splash for a CEO than Dick Parsons. We’re talking about a lawyer with ties to Rockefeller, President Barack Obama.”

And NBA Commissioner Adam Silver had high praise for Parsons, saying in a release, "Dick's credentials as a proven chief executive speak for themselves and I am extremely grateful he accepted this responsibility."

It’s those credentials that most likely got Parsons the job. Currently serving on the board of directors for Madison Square Garden, Parsons previously served as Time Warner’s CEO and even chaired Citigroup until 2012.

But not everyone is pleased with the decision, citing Parsons’ checkered corporate past. The businessman was caught in a fraud investigation in the eighties, left Citigroup in a wake of lawsuits and even oversaw the Time Warner-AOL deal, which Forbes calls one of the worst business decisions ever made.

The Daily Banter sums it up, writing, “It’s the same story every time: Three executive jobs, three disasters, each worse than the previous one.”

Parsons will step down from his position at Madison Square Garden and join the team immediately. Meanwhile, Donald Sterling is vowing to fight any order from the NBA to sell the team.