Former Software Engineer Aims To Change The Future Of Farming 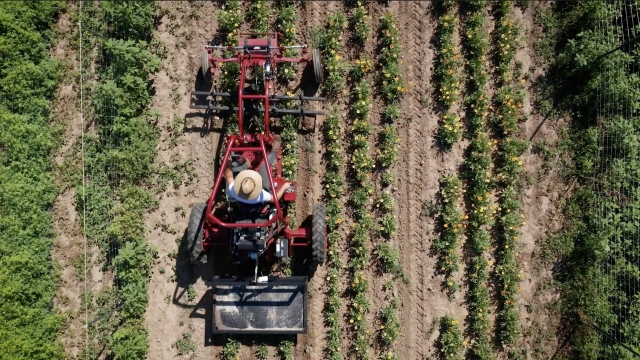 SMS
Former Software Engineer Aims To Change The Future Of Farming
By Sam Eaton
By Sam Eaton
August 4, 2022
A former IBM engineer is building open-source tractors for the masses in hopes of changing how food is grown and who grows it.

The founder of Ronnie Baugh Tractors in Paint Rock, Alabama learned an invaluable lesson as a marine in the Vietnam War: If you believe something’s impossible, you’re dead.

Horace Clemmons, now 79, says that advice not only kept him alive in the war; it’s also the driving force behind his current effort to reinvent an industry now dominated by corporate giants like John Deere and AGCO.

Clemmons worked for IBM in the 1970s as an early software engineer, but his success came after he left that job and founded the first cash register company to use open-source software.

In a former t-shirt factory surrounded by cotton farms that now export their harvest to China, Clemmons today is trying to bring that same open-source philosophy to tractors.

Everything that goes into a tractor is somewhat cheap and widely available. If someone can’t afford the $22,000 sticker price, Clemmons will sell them the plans to build their own. Its “open system design” is a far cry from the patented and proprietary technology of a John Deere.

The hope is that this novel approach will inspire farmers to innovate and customize the tractor the same way open-source computing and the coders who had access to it sparked the PC revolution that changed the world.

"So IBM started dominating the PC market, but Michael Dell in his dorm room looked at what IBM was doing and said, 'But the customers are asking for something different,'" Clemmons said. "And IBM says, 'No, no, you buy what I got.' And Michael decided, 'Screw that. I'm going to start a business doing what the customer wants done.' Like, what was Dell's revenue last year? 107 or 8 billion. And what was IBM's? 50 something? Okay. If we do the right thing, that'll be John Deere 10 years from now."

Clemmons says his ultimate goal is to give the millions of impoverished small farmers around the world access to mechanization and the economic empowerment that comes with it. He says the whole concept behind Ronnie Baugh Tractors is to show the world what’s possible. Partners in Uganda, Senegal and the Philippines have already licensed the design and are now building Oggun tractors domestically. They’re even adding two-wheel and fully electric versions to the lineup.

Having access to low cost, highly customizable agricultural equipment that is also open-source technology has the potential to benefit millions of small farmers in the developing world. But in the U.S., the idea is also gaining traction — for very different reasons.

In Tarrytown, New York, the Stone Barns Center for Food and Agriculture is like a living laboratory for sustainable food production. Jack Algiere, the center’s director of agroecology, says he purchased one of Clemmon’s first Oggun tractors because of its versatility.

"The diversity of a farm like this where we're growing literally hundreds of different crops — there is no one piece of equipment, there is no giant thing that we'll use to solve all of our problems," Algiere said. "There are a lot of little instruments in our toolbox, so we want those to be as minimal as possible and as repairable as possible."

Not to mention, there's the ability to tinker with the design. Algiere says he’s made multiple modifications, cutting and welding the frame to raise the floorbed, making room for nearly a dozen different custom tools. All of these changes are shared among the growing Oggun community of small farmers. Farmers, he says, who have been underserved by the agricultural equipment industry since big agriculture all but wiped out the small farm in the 1950s.

"No one goes small anymore," Algiere said. "Once you get small, you go into garden tractor garden equipment, lawn tractors, because that's where the market is. This is an invisible market."

It's an invisible but growing market. Algiere says as climate change wreaks havoc on agriculture, the need to adopt a smaller scale, locally adapted approach to growing food has never been greater.

"It's not about reliving some past or, you know, a fairy tale of what agriculture was, but what our future looks like," Algiere said.

At the Hudson Valley Seed Company in Accord, New York, Steven Crist uses an Oggun tractor to grow more than 70 varieties of crops a year, producing organic, heirloom seeds that are shipped all over the country.

"For us here, it's our finesse tool," Crist said. "When we got this tractor, we were scaling up at the same time, so we built our whole farm around this thing."

Crist says aside from the utility of the tractor, he felt aligned with the philosophy behind it.

"It felt in league with the mission of seed saving, organic seed saving in general, where we're trying to not create borders, not control a patent or a thing," Crist said. "We're trying to proliferate it and give people access to the ability to do good work in the world. That's kind of mushy, but it's true."

With climate change and an ever-widening global economic divide, Clemmons says he’s determined so see his plans through, even if it takes generations.

"I mean, people tell me I'm crazy, and I agree with them," Clemmons said. "I have a sister who tells me I'm as crazy as she is, and I chuckle and say, 'You're right, but mine is socially beneficial. I am me. I get up every day. Being me."

Clemmons says he would rather fail trying to change a broken system than succeed by following its rules.