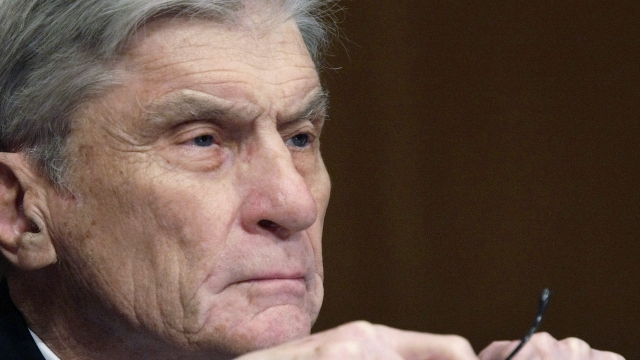 Former Sen. John W. Warner of Virginia, a former Navy secretary who was once married to Elizabeth Taylor, has died at 94, his longtime chief of staff said Wednesday.

Warner died Tuesday of heart failure at home in Alexandria, Virginia, with his wife and daughter at his side, Susan A. Magill said.

"He was frail but had a lot of spirit and was involved until his last days," Magill said.

A former secretary of the Navy, Warner was for a time was chairman of the Senate Armed Services Committee. He had an independent streak that sometimes angered more conservative GOP leaders.

Warner was also the sixth of Taylor’s seven husbands. The two were married from 1976 to 1982.

Democrat Mark Warner, who had challenged him for the Senate in 1996 and went on to serve a term as Virginia’s governor, won the election to succeed him in 2008. After years of rivalry, the two became good friends, and John Warner attended his swearing-in in January 2009. Mark Warner — no relation — said his friend “epitomizes what it means to be a senator.”

"Virginia has lost an unmatched leader, and my family has lost a dear friend," said Sen. Tim Kaine, D-Va. "Once I came to the Senate, I understood even more deeply the influence of John Warner. I came to know John McCain, Carl Levin, and so many others who served with him and attested to his integrity and outsized influence in a body he loved so dearly."

John Warner had an independent streak that sometimes infuriated conservative party leaders but won him support from moderates in both parties. The courtly senator with chiseled features and a thick shock of gray hair was so popular with Virginia voters that Democrats did not bother to challenge him for his 2002 reelection that won him his fifth term.