Sean Spicer Crossed An Item Off His Bucket List 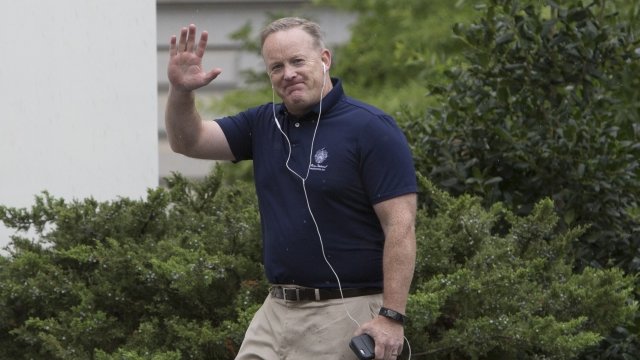 The former U.S. press secretary was in Italy for an International Catholic Legislators Network gathering when he met the pope.

Spicer attended an International Catholic Legislators Network meeting earlier this week in Italy. While there, the pope received the group at the Vatican.

In a photo published to Vatican Radio's Facebook page, you can see Spicer snapping a picture of the Catholic leader.

ICLN is a nonpartisan group composed of elected officials from around the world who are Catholic. America magazine reported four members of the U.S. House of Representatives were also at the meeting: Alex Mooney, Jeff Fortenberry, Andy Harris and Dan Lipinski.

CNN reported earlier this year that Spicer, a Catholic, had "meeting the pope" on his bucket list.

The last person to hold the position was Anthony Scaramucci.

Spicer was probably bummed he wasn't with President Donald Trump and a few select advisers in May when they met the pope overseas.

Spicer quit his press secretary post in July but stayed with the Trump administration to help his successor — Sarah Huckabee Sanders — transition into her new role. Spicer's last day is Thursday.

Since Spicer resigned, he's had a relatively low profile, and it seems he's going to keep it that way. Reports say Spicer was asked to join ABC's "Dancing with the Stars" this fall, but he declined.