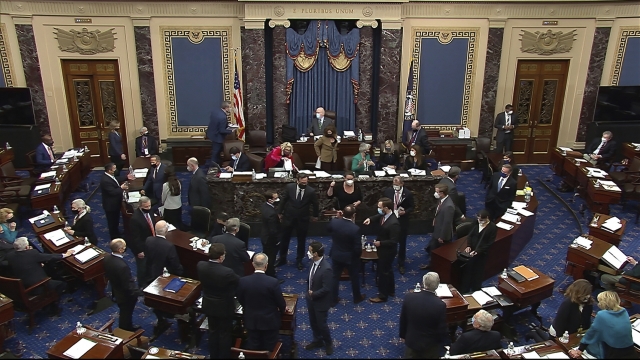 The Senate has voted to acquit Donald Trump on the charge of inciting an insurrection at the U.S. Capitol.

The 57-43 vote Saturday in favor of conviction fell short of the required two-thirds majority, marking the end of the former president's historic second impeachment trial.

"It is therefore ordered and adjudged that the said Donald John Trump be - and he is hereby - acquitted of the charge in said article," said trial presiding officer Sen. Patrick Leahy.

Seven Republicans joined Democrats in the majority vote. The vote followed dramatic events Saturday morning after the Senate voted to allow witness testimony - a move that could have forced a much longer trial. But Democrats instead agreed to a compromise of introducing a statement about alleged remarks by the former president during a heated call with GOP House Leader Kevin McCarthy.

Republican Rep.   said in a statement that McCarthy told her that he called Trump, imploring him to call off his supporters who were storming the U.S. Capitol on Jan. 6 to stop the certification of Joe Biden's election victory. She said McCarthy told her Trump responded dismissively, saying: "Well, Kevin, I guess people are more upset by the election than you are."

Prospects for acquittal increased when Senate Minority Leader Mitch McConnell said he wouldn't vote to convict Trump. He argued that the Senate lacks jurisdiction to try the case after Trump's presidency has ended - even though the Senate rejected that argument at the outset of trial.

But after Trump's acquittal, McConnell held the former president responsible for the Capitol violence.

"There's no question - none - that President Trump is practically and morally responsible for provoking the events of the day. No question about it," he said. "The people who stormed this building believed they were acting on the wishes and instructions of their president."