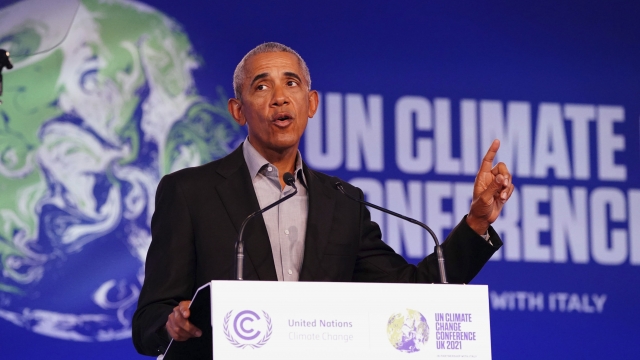 SMS
Former President Obama Hits Russia, China At U.N. Climate Conference
By Associated Press
By Associated Press
November 8, 2021
He criticized the Russian and Chinese presidents for not joining other global leaders at the COP26 climate talks in Glasgow, Scotland.

Former President Barack Obama expressed confidence at U.N. climate talks Monday that the Biden administration will ultimately get its $555 billion climate package through Congress, and faulted U.S. rivals China and Russia for what he called a “dangerous lack of urgency” in cutting their own climate-wrecking emissions. 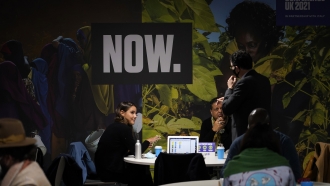 As nations bemoaned a lack of trust and progress in the climate talks, Obama, one of the leaders who paved the way for the historic 2015 Paris climate deal, threw in a touch of his trademark hope even while talking about “images of dystopia” creeping into his dreams.

His comments came as conference leaders acknowledged Monday that many key sticking points exist after a week of talks. A trust gap between rich and poor nations on climate change issues emerged when the negotiations went through a checklist of what's left to be done. Developing countries used the word “disappointing” several times when leaders talked Monday about the progress to date. 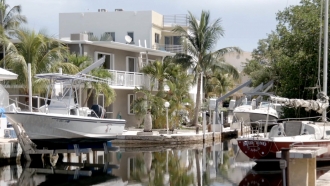 How Climate Change Is Affecting Life In The Florida Keys

The U.N. climate conference in Glasgow, Scotland, is the former American president's first since he helped deliver the triumph of the 2015 Paris climate accord, when nations committed to cutting fossil fuel and agricultural emissions fast enough to keep the Earth's warming below catastrophic levels of 2.7 degrees Fahrenheit.

And while in 2015, rapport between Obama administration negotiators and their Chinese counterparts was seen as paving the way to the global Paris accord, Obama on Monday criticized Chinese President Xi Jinping and Russian President Vladimir Putin for not joining other global leaders at the climate talks in Glasgow.

“It was particularly discouraging to see the leaders of two of the world’s largest emitters, China and Russia, decline to even attend the proceedings, and their national plans reflect what appears to be a dangerous lack of urgency,” Obama said.

No deals have been made yet on three main goals of the U.N. conference. Those are pledges to cut emissions in half by 2030 to keep the Paris climate deal’s 1.5 degree Celsius temperature limit goal alive; the need for $100 billion annually in financial help from rich countries to poor ones; and the idea that half of that money goes to adapting to global warming’s worst effects. Several other issues, including trading carbon and transparency, also weren’t solved yet.