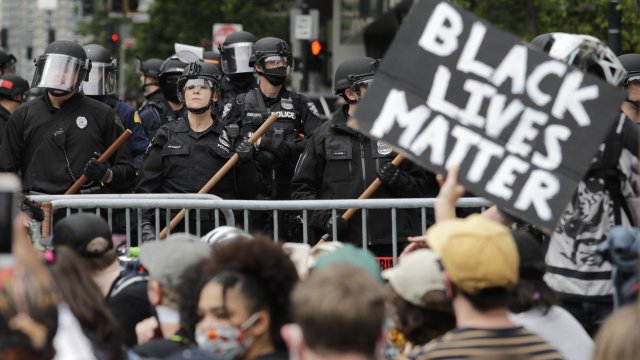 The "blue wall of silence" refers to the informal code in law enforcement that discourages officers from reporting police misconduct and corruption.

Law enforcement departments around the country are grappling with the growing demands for police reform.

Ron Stallworth: "We tend to resist being judged by outsiders. Thus, if we know of somebody committing a wrong, we tend to stand by that officer simply because he’s one of us."

Professor David Thomas: "Police have always had 'cultures.' And it's always an individualized culture of its own — separate from society."

Stallworth: "We tend to erect this 'blue wall of silence.' We erect a barrier, a shield to protect our own. It's nothing new. It's been going on long before I even became a cop in the '70s."

The "blue wall of silence" refers to the longstanding and informal code in law enforcement that punishes whistleblowers and discourages officers from reporting police misconduct and corruption.

Thomas: "I've seen the retaliation happen. … I've seen people transfer. … I've seen officers quit and go to another agency, because they just refuse to be a party to it."

Law enforcement researchers, activists and politicians have recognized the issue for years — recommending external reviews and internal incentives to combat the code of silence. Among the general public, a recent AP poll on police reform found that more than 80% of respondents support "requiring police to report misconduct by their peers."

Thomas: "That is a very difficult position to be in, because this position, policing is about trust."

Both Thomas and Stallworth support the calls for more internal accountability, but also recognize the difficulty to change the culture.

Stallworth: "You have to encourage officers to step forward. … They can't be allowed to fear backlash from their peers because they choose to do the right thing while others choose to remain silent."