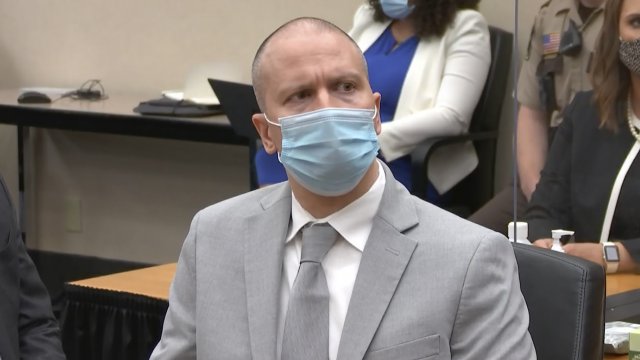 Former Minneapolis police officer Derek Chauvin received a 22.5-year prison sentence on Friday, two months after being found guilty on all counts in the murder of George Floyd.

Though Chauvin is expected to appeal, for Floyd's loved ones — and millions around the world — the sentence represents, for now, a final act of justice.

The prosecution, however, had asked for 30 years.

"This 22-year sentence they gave this man, it's a slap on the wrist," said George Floyd's brother, Rodney.

At a press conference minutes after the sentencing, Floyd family attorney Ben Crump urged Congress to do its part to hold police officers accountable nationwide.

During Friday's sentencing hearing, Chauvin and his mother both addressed the court for the first time.

"I'm not able to give a full formal statement at this time. But briefly, though, I do want to give my condolences to the Floyd family," Chavin said.

Earlier his mother said: "It has been difficult for me to hear and read what the media, public and prosecution team believe Derek to be an aggressive, heartless and uncaring person. I can tell you that is far from the truth."

The hearing also included statements from Floyd's family, including his brothers and 7-year-old daughter.

"If you could say anything to your daddy right now what would it be?" Gianna Floyd was asked.

"It would be: I miss you and I love you," she replied.

"Chauvin had no regard for human life, for George's life," said Philonise Floyd.

"I wanted to know from the man himself. Why? What were you thinking? What was going through your head when you had your knee on my brother's neck?" asked Terrence Floyd.

Judge Peter Cahill said he gave Chauvin more prison time than the 12.5 years recommended because of two factors: Chauvin's position of authority as an officer and the fact that the murder was "particularly cruel."

Chauvin will likely serve only two-thirds of his sentence behind bars if he shows good behavior and is granted parole.

Since his conviction, he's been held at a maximum security prison — away from other inmates for his safety.