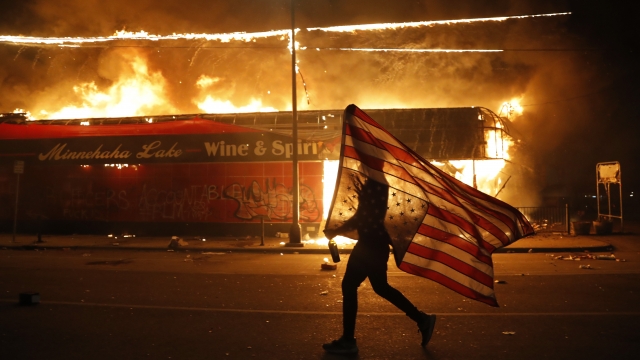 After three nights of protests in Minneapolis, the fired police officer accused of killing George Floyd is in custody.

The complaint alleges that Chauvin “caused the death of George Floyd by perpetrating an act eminently dangerous to others and evincing a depraved mind, without regard for human life.”

Chauvin kneeled on Floyd's neck for more than seven minutes while Floyd was handcuffed.

In a statement, Floyd family attorney Ben Crump said the charge of third-degree murder — which carries a maximum sentence of 25 years and applies to cases where there is no clear intent to kill — is not enough:

And Crump said that the three other fired officers involved should also face charges. The investigation into their actions is ongoing.

This arrest comes after the governor of Minnesota tried to walk the line between the urgent need to restore order and empathy for the protesters.

“The very tools that we need to use to get control, to make sure that buildings aren’t burned and the rule of law collapses, are those very institutional tools that led to that grief and pain. I understand very clearly there is no trust in many of our communities,” said Minnesota Gov. Tim Walz.

Thursday night, demonstrators set fire to the Minneapolis Police Department's 3rd Precinct building, which officers had evacuated. The four police officers who were fired over Floyd's death had all worked at the 3rd Precinct.

"We have to restore order to our society before we can start addressing the issues, before we turn back to where we should be spending our energy: making sure that justice is served," said Minnesota Gov. Tim Walz.

"They believe, essentially, that peaceful protesting is not getting the job done. And so this is their way to buck up against the system," author and Michigan State University professor Jennifer Cobbina said.

Jennifer Cobbina conducted nearly 200 interviews with protesters in Ferguson, Missouri, and Baltimore following the historic unrest after the deaths of Michael Brown and Freddie Gray. She says an arrest without a conviction may not be enough for angry community members

"We will see people feeling some semblance of justice occurring. However, the key will be in whether or not these individuals will actually be convicted and sentenced. Because if they are not, what we will see happening, at least what we saw happen in Ferguson, is you will see another uprising," said Cobbina.

Convictions in these cases are extremely rare. Between 2005 and March 2019, only 35 officers were convicted of a crime related to an on-duty fatal shooting, while on average between 900 and 1,000 people are killed by police officers per year.

"Yes, they are protesting the death of George Floyd. They are also protesting a broader pattern of marginalization and criminalization of Black people," said Cobbina.

Gov. Walz acknowledged the need for systemic change and pledged to deliver.

“This is the moment where we start. But every time we get to this place, we never start the process to make sure it never happens again,” said Walz.