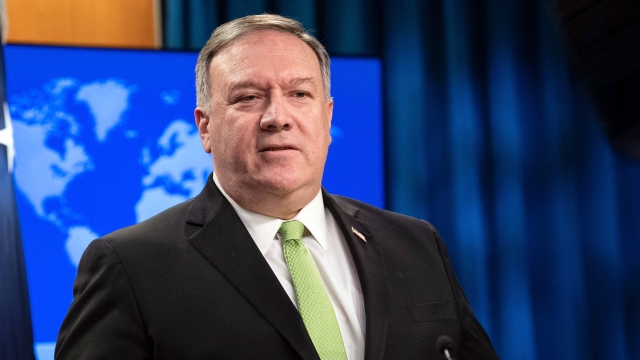 "I recommended to the President that Steve Linick be terminated. Frankly, should've done it some time ago," Pompeo said at a news conference.

Linick, the fourth internal watchdog to be let go in six weeks, was said to be investigating Pompeo’s personal use of government resources and the circumstances around an $8 billion Saudi weapons deal.

It’s supposed to be a nonpartisan job, appointed by the president -- but inspectors general appear to be under fire by President Trump.

"This president is not just out to ax IGs who are touching sensitive things that he doesn't want touched. He is out to destroy the oversight institution itself," says Joel Brenner.

He was the former inspector general of the NSA under President Bush. He also served as head of counterintelligence in the Office of the Director of National Intelligence under President Obama. Brenner says most presidents don’t like IGs but President Trump takes it to another level.

"It happens to be very political whether you like it or not. And many of these people were Obama appointments," President Trump told reporters at a press conference. "So I just got rid of them."

Inspectors General don't necessarily change with a new administration -- though it’s not uncommon for presidents to remove them. But according to the Brookings Institution, the turnover in inspector general offices under the Trump administration has reached “historically high” levels.

"He's putting in lapdogs to a watchdog's job," says Brenner. "Basically, every one of these guys who is doing anything significant, he's wiping out. It is a purge."

The head of the Association of Inspectors General has called IGs “the last bastions protecting good government and the rule of law,” insisting they stay above the fray.

Supporters of Linick also point out that before investigating Pompeo at the State Department, he was probing Hillary Clinton’s use of a private email server.

The slew of firings also include the intelligence community’s IG Michael Atkinson, who handled the whistleblower complaint leading to Trump’s impeachment, and the Pentagon’s acting inspector general, Glenn Fine, who was tasked with overseeing pandemic stimulus spending.

Democrats put forth legislation in April to protect IGs, including a for-cause provision and time limits to serve.