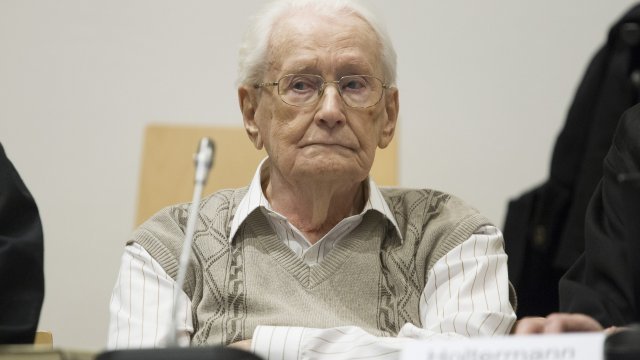 He's set to serve four years for his role as the "bookkeeper of Auschwitz."

A 96-year-old former Nazi officer who worked at the infamous Auschwitz death camp was denied clemency by German prosecutors Wednesday.

Oskar Groening, known as "the bookkeeper of Auschwitz," will have to serve four years in prison. In 2015, he was convicted as an accessory to the murder of 300,000 people during World War II. But he hasn't served any time due to the appeals process.

Groening was responsible for counting the money found in belongings of people arriving at the camp and sending it to the Nazi headquarters in Berlin.

With The FBI's Help, Poland Gets Back A Painting The Nazis Stole

The painting known as "Street With Castle Ruins" made its way to a town near Philadelphia, where the FBI recovered it.

Groening said he was "morally complicit" in the crimes but has denied legal guilt.

A request to suspend Groening's sentence based on his age was denied in August. It isn't clear if he'll appeal Wednesday's ruling.