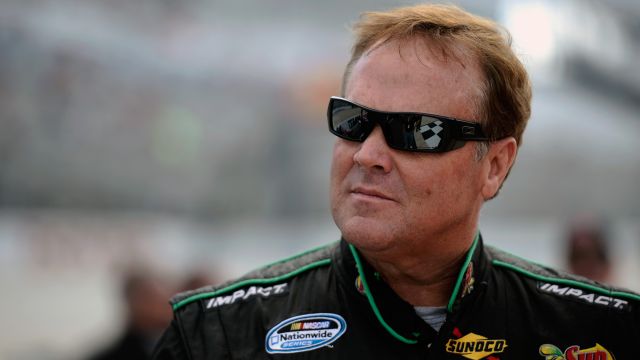 Wallace said he was leaving a Rascal Flatts concert with his daughter when he was jumped by three men.

Three men have been arrested after former NASCAR Sprint Cup driver Mike Wallace was reportedly jumped after leaving a concert in North Carolina over the weekend.

Warning: Some of the images in this story may be disturbing.

"I remember the hit, and then I woke up on the ground," Wallace told WJZY.

Wallace says he was leaving a Rascal Flatts concert on Friday with his daughter in Charlotte when the alleged attack happened. Wallace was reportedly knocked unconscious and suffered a concussion and other injuries.

Wallace's daughter Lindsey tried to help her dad, but the attackers supposedly hit her, too.

Mike's brother Kenny, who is also a former NASCAR driver, posted about the attack on Facebook.

He shared this photo, showing a bloody and beaten Mike.

But Wallace's daughter suggests a woman might have also been involved.

"The mom of this group came up and put her hands on me and started strangling and pulling my hair and threw me down to the ground," Lindsey said.

The department didn't indicate that a woman was arrested in connection to the attack. All three men were charged with simple assault and released on bond. They're scheduled to appear in court July 22.

This video includes images from the Mecklenburg County Sheriff's Department and Getty Images.

The horse's owner said they will use the time for Rich Strike to rest before the Belmont Stakes next month.