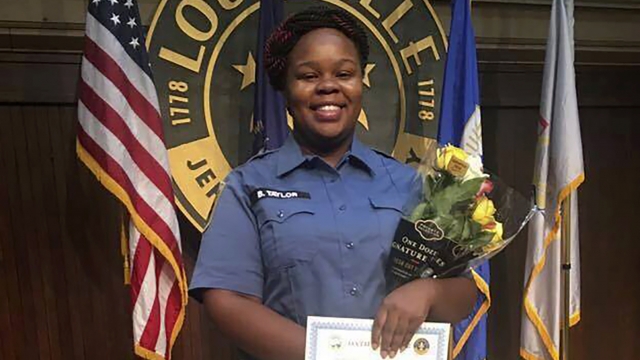 SMS
Former Louisville Officer Pleads Guilty In Breonna Taylor Case
By Associated Press
By Associated Press
August 24, 2022
Investigators say the officer added a false line to the warrant and later conspired with another detective to create a cover story for Taylor's death.

A former Louisville police detective who helped falsify the warrant that led to the deadly police raid at Breonna Taylor's apartment has pleaded guilty to a federal conspiracy charge.

Taylor, a 26-year-old Black woman, was shot to death by officers who knocked down her door while executing a drug search warrant. Taylor's boyfriend fired a shot that hit one of the officers as they came through the door and they returned fire, striking Taylor multiple times.

Goodlett, 35, appeared in a federal courtroom in Louisville on Tuesday afternoon and admitted to conspiring with another Louisville police officer to falsify the warrant. Goodlett briefly answered several questions from federal judge Rebecca Jennings Grady.

Taylor's mother, Tamika Palmer, was in the courtroom Tuesday but did not speak after the proceedings.

Three former Louisville officers were indicted on criminal civil rights charges earlier this month by a federal grand jury. Goodlett was not indicted, but charged in a federal information filing, which likely means the former detective is cooperating with investigators.

Goodlett will be sentenced Nov. 22. Grady said there may be "extenuating circumstances" that may move the court to push back the sentencing date. Part of the plea hearing was also kept under seal and was not discussed in open court Tuesday. She faces up to five years in prison for the conviction.

She resigned from the department Aug. 5, a day after U.S. Attorney General Merrick Garland announced new federal charges in the Taylor case.

Former officers Joshua Jaynes and Kyle Meany were indicted on charges related to the warrant used to search Taylor's home. A third former officer, Brett Hankison, was charged with using excessive force when he retreated from Taylor's door, turned a corner and fired 10 shots into the side of her two-bedroom apartment. He was acquitted by a jury on similar state charges earlier this year. Jaynes, Meany and Hankison have all been fired.

The three former officers face a maximum sentence of life in prison if convicted on the civil rights charges.

Federal prosecutors said in court records that Jaynes, who drew up the Taylor warrant, had claimed to Goodlett days before the warrant was served that he had "verified" from a postal inspector that a suspected drug dealer was receiving packages at Taylor's apartment. But Goodlett knew this was false and told Jaynes the warrant did not yet have enough information connecting Taylor to criminal activity, prosecutors said. She added a paragraph saying the suspected drug dealer, Jamarcus Glover, was using Taylor's apartment as his current address, according to the court records.

Two months later, when the Taylor shooting was attracting national headlines, the postal inspector told a media outlet he had not verified packages for Glover were going to Taylor's apartment. Jaynes and Goodlett then met in Jaynes' garage to "get on the same page" before Jaynes talked to investigators about the Taylor warrant, court records said.

They decided to say Sgt. John Mattingly, who is identified in the court records as J.M., told them Glover was receiving packages at Taylor's home, according to prosecutors. Mattingly was shot in the leg during the raid at Taylor's apartment.

Meany, who signed off on the Taylor warrant and was still a Louisville police sergeant when he was indicted on Aug. 4, was fired by Louisville Police Chief Erika Shields on Friday.

Shields said in a statement that Meany has not yet had his case heard by a jury, but "he is facing multiple federal charges after a lengthy investigation by the DOJ" and should not "expect continued employment under such conditions."

Hankison was the only officer charged who was on the scene the night of the killing.