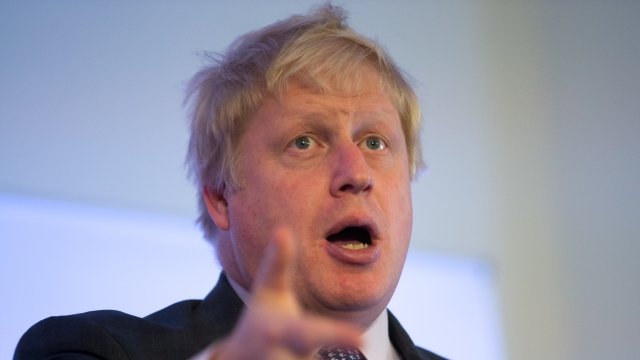 SMS
Former London Mayor Compares The European Union To Hitler
By Melissa Prax
By Melissa Prax
May 15, 2016
In an interview with The Telegraph, Boris Johnson said the EU's desire to form a superstate resembles Hitler's vision.
SHOW TRANSCRIPT

London's former mayor is fighting for the United Kingdom to leave the European Union, but his most recent attempt to prove that point has gained him a lot of criticism.

Boris Johnson, who's a current member of the U.K. Parliament, said in an interview with The Telegraph that the EU shares a common thread with Hitler — a desire for a powerful superstate — though he did note the EU is using "different methods."

His comments come amid the ongoing "Brexit" debate. On June 23, British voters will decide whether to remain in the EU.

British Prime Minister David Cameron has been openly against leaving the EU, and so have other leaders — including President Barack Obama.

Shadow Foreign Secretary Hilary Benn said, "I think to try and compare Hitler ... with the free democracies of Europe coming together to trade, to cooperate and to help secure peace since that war is deeply offensive."

But Johnson's bold comparison has backers, too.

"There have been all sorts of attempts to dominate Europe, and these have all floundered because Europe is not naturally one entity," former Chancellor Lord Lamont said.

Johnson ended his interview by noting that the EU vote was "a chance for the British people to be the heroes of Europe."

This video includes clips from Sky News, The White House, The Telegraph, UKIP MEPs, European Union and Vote Leave and images from Getty Images and the German Federal Archives.