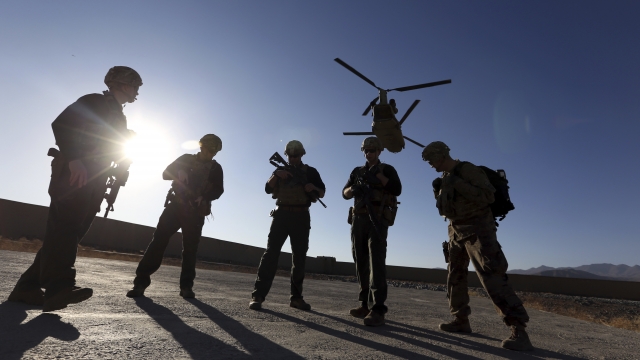 None of the four former national security officials who testified before the House Foreign Affairs Committee on Thursday believed President Donald Trump’s claim he wasn’t briefed on intelligence about a Russian threat to U.S. troops in Afghanistan.

"Even if it was only vaguely clear from the raw intelligence that the Russians might be paying bounties for the killing of American soldiers, that information would have made its way to the highest levels of the United States government, including the president, before the analysts concluded their work," said Michael Morell, former acting and deputy director of the CIA.

The president continues to dismiss the assessment, as his administration investigates who leaked information to journalists.

"It is outside of the norm of presidential behavior. I'll put it that way," Priess said.

"If you ask me if I'm surprised that he's willing to overlook this, then the answer is no. It seems to be a pattern. And unfortunately, it's one that tends to give the benefit of the doubt to our adversary," Cardillo said.

Russia denies that its military intelligence agency offered money to the Afghan Taliban. The top U.S. general in the Middle East recently told reporters he, quote, “sent the intelligence guys back to continue to dig on it.” Defense Secretary Mark Esper testified that he had knowledge of payments but not bounties per se. And a core argument among the president and his political allies: that there was no consensus among U.S. spy agencies.

Briefers say that’s common — especially with the President’s Daily Brief, which traces back to 1946, and President Harry Truman.

"If it's in the PDB in the first place, it has some certain level of credibility or it wouldn't be brought up. The idea of verifying everything before it's presented to the president, that actually goes against the purpose of intelligence. The whole point of intelligence is to get the president early information, to get him ahead of decisions so that he's not waiting until something has already happened before acting on it," Priess said.

Lawmakers have questions for the secretary of state, national security adviser, and the president’s briefer, Beth Sanner — who made a rare appearance at an event this week.

"I really feel for her because she's in a tough position. It's been so now skewed that if you bring something to the president that doesn't comport with his worldview, by definition, you're part of the deep state or you're part of the Never Trumpers," Cardillo said.

The bounty allegation comes after President Trump endorsed Russia re-joining the G-7 and planned to scale down troops in Germany, prompting fears of Russian expansion. Former CIA officers also recently said the president directed them to share intelligence with Russians in counterterrorism efforts.