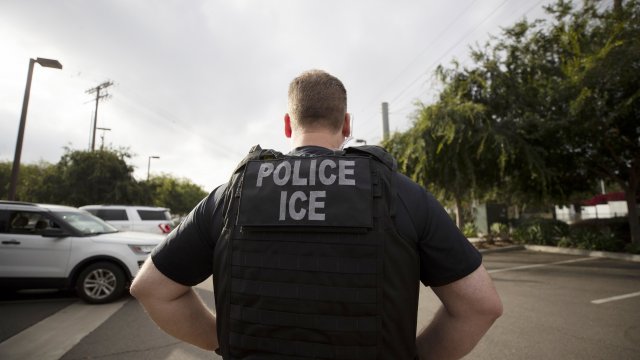 Pressure is growing on the Trump administration to release vulnerable and nonviolent immigrants from ICE detention after the agency confirmed a first coronavirus case in Bergen County Jail, New Jersey, on Tuesday.

"This was inevitable," said John Sandweg, who served as an ICE director in the Obama administration. "Every day in a detention facility, you have new detainees coming in. You have prison guards coming in. You have ICE officers who need to come in, food service workers, janitorial workers coming in and coming out on a daily basis," he added.

Sandweg says shrinking the detention population is the only way to protect immigrants, ICE agents and the larger community from a virus outbreak. Unlike prison officials, who have to hold inmates on judges' orders, ICE has the authority to release most immigrants awaiting deportation or asylum hearings.

"It doesn't mean however anybody's getting a free pass. Everybody's going to continue to go through deportation proceedings, you fail to appear to your hearing, you go right back into the detention facility. If you pose a slight flight risk, we can put an ankle bracelet on you and do electronic monitoring."

The U.S. holds roughly 37,000 immigrants in more than 130 locations nationwide — including facilities run by local sheriffs and private contractors. Detainees are often held in tight quarters. Some say they don't have access to soap, masks and other protections. The majority don't have criminal convictions, according to a 2019 analysis by Syracuse University researchers.

"There are thousands of people who are detained with no criminal history whatsoever, who pose no threat to public safety. Release those individuals and keep them in deportation proceedings. Quite frankly, this seems like a no brainer to me," said Sandweg.

ICE announced last week that it will "delay" arrests and use "alternatives to detention" except for those who have committed certain crimes or pose a public safety risk. But the policy shift doesn't apply yet to those already behind bars. The Trump administration also closed the southern border to asylum seekers to reduce the intake of new detainees.

"Our goal is to not even bring people who cross the border illegally into those facilities at all. It's to go straight back to the ports of entry to return them to Mexico," said Ken Cuccinelli, acting deputy secretary of the Department of Homeland Security.

ICE says it screens all new detainees for the coronavirus, consults with local health departments to assess the need for testing, and isolates those "with fever and/or respiratory symptoms."

"ICE has a standard medical process. No one comes into their facility without medical processing. And they have tremendous quarantine capabilities that they exercised literally for thousands of people last year at the height of the crisis," Cuccinelli said.

But doctors say without a plan to release some immigrants, a "tinderbox scenario of a large cohort of people getting sick all at once" could happen very soon.

"If I was an ICE agent, the last place I want to go in right now — and I can guarantee you there's a lot of ICE officers who feel this way — is into a crowded detention facility because I know there's a high likelihood that the coronavirus will be spreading like wildfire," said Sandweg.