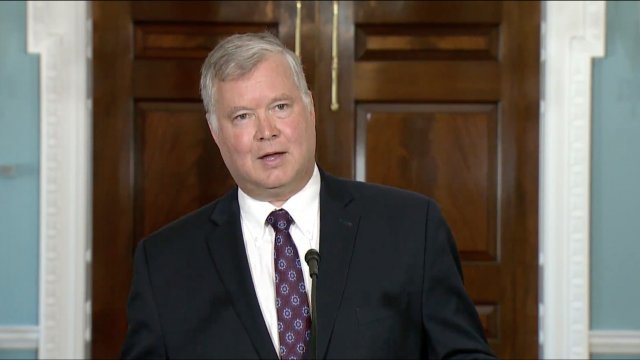 Secretary of State Mike Pompeo announced a special representative to North Korea on Thursday. The two will travel to the country together next week.

In a press conference, Pompeo said former auto executive Steve Biegun "will direct U.S. policy toward North Korea and lead our efforts to achieve President Trump's goal" of full denuclearization on the peninsula.

Biegun has an extensive background in government service. He was an adviser to former Senate Majority Leader Bill Frist and served during the Bush administration as a senior staff member to then-national security adviser Condoleezza Rice. He was also the executive secretary of the National Security Council. And that's just the tip of the iceberg.

He was also reportedly considered to replace Lt. Gen. H.R. McMaster as national security advise when McMaster left the office earlier this year.

His appointment comes as progress on denuclearization efforts seem to have stalled. Satellite imagery presented by monitoring group 38 North seems to show that "no new dismantlement activity" has taken place since Aug. 3. North Korea also recently accused the U.S. of having a "gangster-like mindset" on the issue.

It's unclear if Biegun and Pompeo will get to meet with North Korea's leader when they travel there next week. This will be Pompeo's fourth trip to the country, but he has yet to sit down with Kim Jong-un.