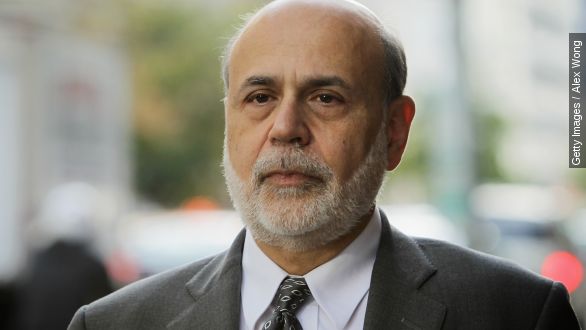 SMS
Former Fed Chair Says His New Gig Not A Conflict Of Interest
By Jamal Andress
By Jamal Andress
April 16, 2015
Former Federal Reserve Chairman Ben Bernanke will be working as an adviser for one of Wall Street's largest hedge funds.
SHOW TRANSCRIPT

From the right hand of President Obama to having the ear of one of the largest hedge funds on Wall Street — former Federal Reserve Chairman Ben Bernanke has signed on to be an adviser to Citadel Investment Group.

Citadel, a Chicago-based $25 billion hedge fund, is an asset manager and, therefore, is not regulated by the Federal Reserve. Bernanke told The New York Times that played a large part in accepting the job.

"Mr. Bernanke said he was sensitive to the public's anxieties about the 'revolving door' between Wall Street and Washington."

Bernanke also told The Times he won't be doing any lobbying on Citadel's behalf.

That revolving door has had no shortage of Washington patrons, though recently many have opted to work with hedge funds instead of banks to seemingly avoid a conflicts of interest. Not even a month ago, former Federal Reserve Governor Jeremy Stein announced he would be doing similar advising work for $20 billion hedge fund BlueMountain Capital Management. (Video via Brookings Institution)

Bernanke's predecessor, Alan Greenspan, left the Federal Reserve in 2006. He's been advising on Wall Street and abroad ever since. Greenspan has worked as an adviser for Pacific Investment Management Co., Deutsche Bank and Paulson & Co., among others.

This will be Bernanke's first venture into the private finance sector. Before taking on the Federal Reserve, Bernanke was a tenured professor at Princeton University.