Donna Brazile Accuses Clinton Of A 'Secret Takeover' Of The DNC 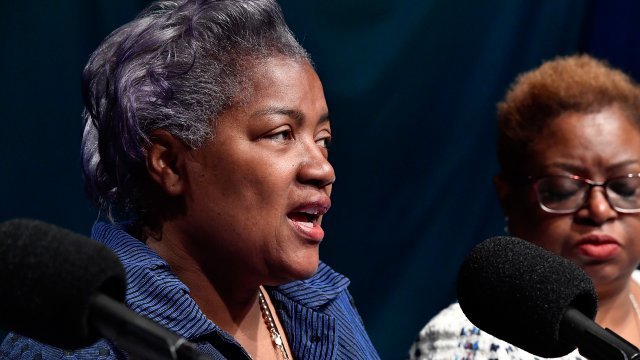 SMS
Donna Brazile Accuses Clinton Of A 'Secret Takeover' Of The DNC
By Matt Picht
By Matt Picht
November 2, 2017
The former interim head of the Democratic National Committee says it signed an agreement giving Clinton control over the party during the primary.
SHOW TRANSCRIPT

Donna Brazile, the former interim head of the Democratic National Committee, has a new book coming out. And right now it seems like it could confirm the worst fears of supporters of Sen. Bernie Sanders.

An excerpt published in Politico claims Hillary Clinton's presidential campaign effectively took over the DNC — months before she was named the official nominee over Sanders.

Brazile says the DNC was deeply in debt when she took over and was kept afloat through a joint-fundraising agreement that effectively gave the Clinton campaign control over the party. Brazile wrote, "This was not a criminal act, but as I saw it, it compromised the party's integrity."

The Clinton-DNC fundraising arrangement has already been the subject of much scorn among Sanders supporters. But given her former stature in the party, Brazile's allegation could add a lot of weight to those criticisms.

Brazile herself has been accused of being in the tank for Clinton — she resigned from her job at CNN after she was accused of passing the network's town hall questions to the Clinton campaign during the primary.