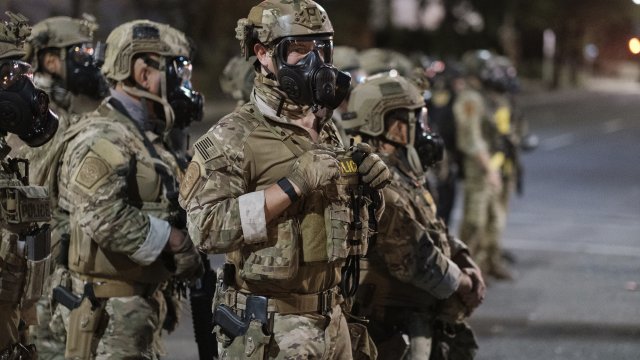 Critics say President Donald Trump is using the Department of Homeland Security to fight political battles against liberal cities. The president says those urban centers are a "mess" that need help from federal law enforcement.

In Portland, Oregon, DHS leaders are giving the President what he wants.

"I don't need invitations by the state, state mayors, or state governors to do our job. We're going to do that, whether they like us there or not," Homeland Security Acting Secretary Chad Wolf told Fox News.

As DHS officers continue their controversial deployment in Portland, and more agents from the department are reported to be soon deployed in Chicago, former officials tell Newsy the department's domestic show of force is unprecedented and harmful.

"The idea of DHS officers running around without names in camouflage units in heavily militarized gear is fundamentally at odds with the protective mission that it was intended to function," said Paul Rosenzweig.

Rosenzweig was a Homeland Security official under George W. Bush. He says DHS, which was created after 9/11 to protect the nation from terrorism and other external threats, has veered away from its core mission and has become overly politicized.

DHS says it is deploying officers in Portland to protect the city's federal courthouse, which falls under its mandate. In the wake of George Floyd protests, DHS created a new task force to "protect American monuments, memorials, and statues."

"The threat to those federal facilities and officers did materialize in the July Fourth weekend and has maintained since that time. And as long as it does, we will maintain our presence," said Acting Deputy Secretary Ken Cuccinelli.

But in addition to sending Federal Protective Service agents to Portland, the department is also deploying tactical agents from two immigration agencies: ICE and CBP.

"That very muscular DHS response to what is essentially a law enforcement function in a single city, that again undermines the overall mission of DHS, which is protecting the homeland," said David Lapan.

Lapan was a DHS press secretary in the Trump administration in 2017. He and Rosenzweig say the fact that the department's acting secretary Chad Wolf, and his acting deputy Ken Cuccinelli have not been confirmed by the Senate gives them less independence from President Trump.

"He likes acting officials because he has more control over them," said Lapan.

"A president can achieve these kinds of illegal and illicit ends only if he effectively removes all resistance to him and puts in place a bunch of 'yes men' who will suck up to him and do what he wants," said Rosenzweig.