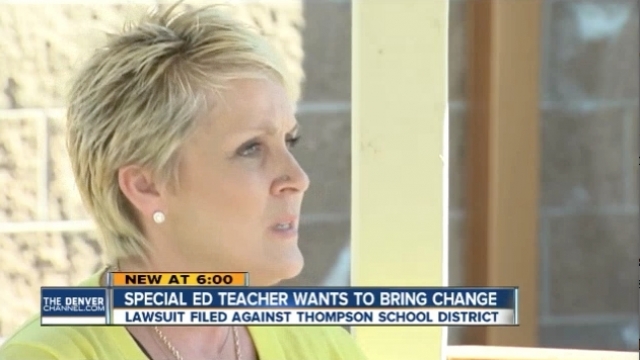 "Every time I went to somebody, I got an eye roll. Like, 'Oh, not again,'" Carrie Giesler told KMGH.

Newsy's partners at KMGH report Giesler was let go from her job after she filed a police report that claims one of her students abused her.

"I ended up with bruises, bumps, bites, slaps across the face, punches in the stomach," Giesler said.

"All things Carrie said could have been prevented if the district and the school had intervened," the KMGH reporter said.

Giesler is now suing for damages. In her lawsuit, she said the school district never trained her how to deal with students who have special needs and violent tendencies.

The Denver Post reports Giesler's lawsuit alleges she called the police to report several incidents, which the suit says include the student striking her with a trash can and head-butting her. The suit also claims the school's principal told her not to go to the police. The student was charged with third-degree assault after he allegedly injured Giesler's hand so badly that she had surgery.

The Colorado Department of Education doesn't require school districts to provide training to handle these types of situations.

"It's a school district and school responsibility to really make sure those teachers are equipped, that they're in a safe environment," Colleen O'Neil, who works at the Colorado Department of Education, told KMGH.