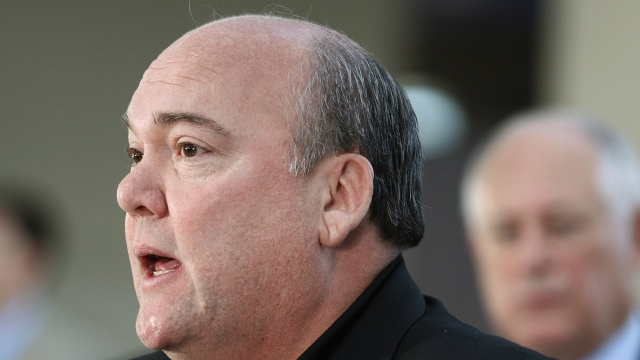 The longtime head of the Chicago Teamsters union was sentenced Wednesday in a tale that crosses organized labor, extortion and popular TV shows.

In Chicago PD, the popular cop drama, police have been busting the bad guys for years. It turns out there was crime going on right under their noses, in the Chicago studio where it and other shows like Chicago Fire and Chicago Med, are filmed.

On Wednesday, ex-Teamster boss John Coli Sr. was sentenced to 19 months in prison for squeezing the studio owner in a very traditional Chicago way — 'pay up or we'll shut you down.'

"According to the allegations, he was collecting, I think, like $25,000 cash in envelopes at a popular Greek restaurant in Chicago," said Jon Seidel, a federal courts reporter for the Chicago Sun-Times.

"He threatened to shut down everything because a lot of his members worked at this studio," said Dan Mihalopoulos, an investigative reporter at WBEZ Chicago.

According to the plea agreement, when Cinespace president Alex Pissios started pushing back on the payments, Coli told him "I will f---ing have a picket line up here, and everything will stop."

We know this word for word because Pissios was wearing a wire and cooperating with the feds, to get out of his own legal troubles related to taxes.

In this segment of "Pop Quiz," Newsy's "In The Loop" explores why certain words can't be said on air and how the rules evolve with language over time.

Reporters covering the case said Coli's brazen language and corruption schemes are all too typical in the city's halls of power.

"We do continue to see some, bad, B-list movie quotes in these corruption cases in Chicago," said Seidel.

"Nothing shocks the federal prosecutors or the media or the public in Illinois any more," said Mihalopoulos.

Coli had connections to all the biggest Chicago and Illinois politicians, Republicans and Democrats.

"Being in charge of the Teamsters means you're in charge of a pretty big army of people around town," said Seidel.

As part of his plea deal, he agreed to fully cooperate with the feds to catch a bigger fish. As a result, a state senator who was on the Teamsters' payroll for a ghost job was sentenced to one year in prison earlier this year.

"There are costs for the public. These are not victimless crimes," said Mihalopoulos.

And who knows where this story ends.

"These cases keep coming, the prosecutors keep bringing them. And we still see those in power continue to get caught doing this. Again, not all, but but far too many," said Seidel.