A Judge Issues An Arrest Warrant For A Former Argentinian President 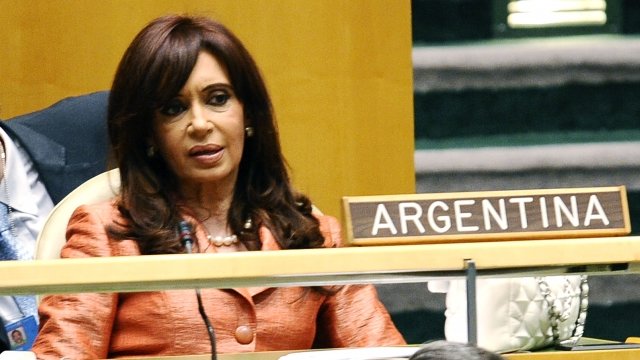 SMS
A Judge Issues An Arrest Warrant For A Former Argentinian President
By Karen Rodriguez
By Karen Rodriguez
December 7, 2017
Former President Cristina Fernández de Kirchner is accused of covering up Iranian involvement in the 1994 bombing of a Jewish center in Argentina.
SHOW TRANSCRIPT

A judge has ordered the arrest of former Argentinian President Cristina Fernández de Kirchner; she's accused of covering up Iranian involvement in the 1994 bombing of a Jewish center.

The order is the latest move to resolve a case that's gripped Argentina for years. Eighty-five people died in the bombing.

The news comes after investigators ruled the death of prosecutor Alberto Nisman a murder, not a suicide. Nisman accused then-President Kirchner of the cover-up and was found dead hours before he was set to present his case to Congress in 2015.

But Kirchner, now a senator, has parliamentary immunity. That means Congress will decide whether to comply with the judge's order. For that to happen, two-thirds of the legislators must decide to remove Kirchner's immunity for an arrest.

Congress has 180 days to make a decision.