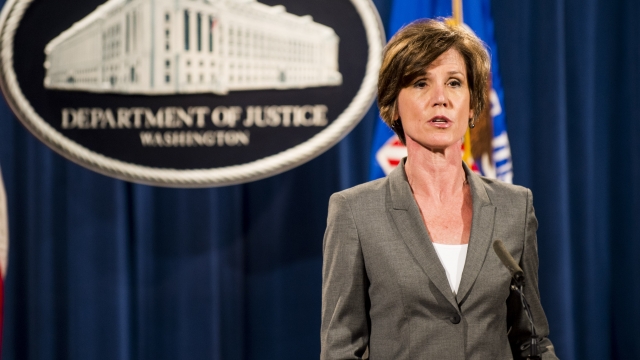 It looks like former acting Attorney General Sally Yates will get the chance to shed light on what she knows about the Trump administration's alleged ties to Russia.

The House Intelligence Committee asked Yates to testify in a hearing about Russia's suspected interference in the U.S. election. She'll appear after several other senior U.S. officials, including the directors of the FBI and National Security Agency.

Yates was scheduled to testify about Russia once before, but committee chairman Devin Nunes canceled that hearing.

Nunes later recused himself from the Russia investigation after he was accused of trying to cover for the White House. He's now under investigation by the House Ethics Committee.

Yates reportedly told the White House that former security adviser Mike Flynn had misled Vice President Mike Pence about contacts with Russian officials. Flynn was asked to resign after those concerns were validated in public.

It's unclear how much about the investigation Yates can discuss. Her attorney gave letters to The Washington Post showing the White House wanted to limit her testimony, citing executive privilege.

Yates' testimony is scheduled for sometime after May 2.