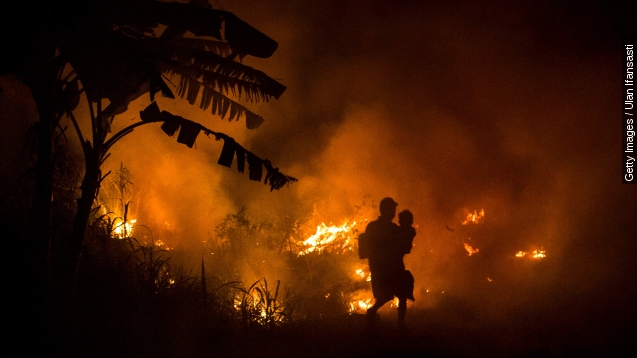 The fires were likely started illegally to clear land.

"Huge plantations for producing palm oil are wiping out the rainforest in Sumatra, where most orangutans live," CBS's John Blackstone reported.

More than 39 million acres of forest destroyed in 15 years, largely for palm oil.

"Palm oil is in about half of all the packaged products in your grocery store. That includes many cookies, chocolates, peanut butter, soap, lotion, even lipstick," KGO-TV's Dan Ashley explained.

The loss of forest makes Indonesia more vulnerable to fires.

"A system is forming in the Pacific that one NASA climatologist called a Godzilla El Nino," CBS' Scott Pelley read.

Fires can smolder underground, making them harder to put out.

Indonesia saw close to 10,000 fires last month. They're the biggest threat to endangered orangutans there.

It'll take a lot of work to put them out.

"We need to build temporary water reserves in the forest, we need to dig canals to flow water to the peat forest ... I think we need three years for all this physical work to be completed, and for you to see the result," Indonesian President Joko Widodo told the BBC.