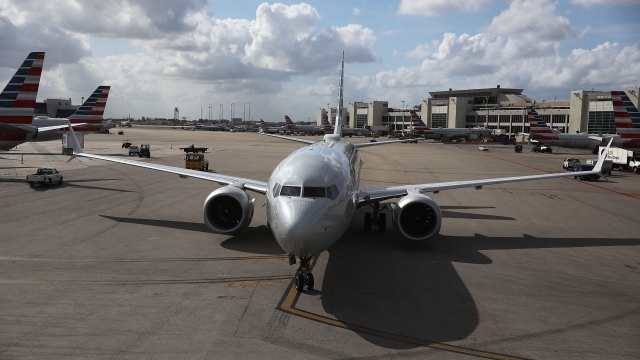 SMS
Foreign Objects Discovered In Some Boeing 737 Max Fuel Tanks
By Caitlin Baldwin
By Caitlin Baldwin
February 19, 2020
Foreign objects were found in some 737 Max planes being stored in Washington state and in San Antonio.
SHOW TRANSCRIPT

Boeing is facing more issues with its 737 Max airliner, this time finding foreign objects in some of its fuel tanks.

Leeham News and Analysis first reported the issue Tuesday. It said the objects, known as foreign object debris or FOD, could be anything from tools to rags. They were discovered in some 737 Max planes in four storage locations in Washington state and in San Antonio.

Leeham says the findings are not connected to the issues linked to two crashes that killed 346 people. The planes have been grounded worldwide since March after software malfunctions were linked to the crashes.

The news prompted Boeing to order inspections for over 400 new 737 Max planes sitting in storage. The process could take a while before the fuel tanks can even be opened to be inspected. Each one will need to be drained and its fuel vapors dissipated.

Boeing said in a letter to employees, "FOD is absolutely unacceptable." The company says it's rolling out a new process to end FOD including implementing a checklist, additional verification checks and posting new signage in work areas.

The FAA told the BBC it's aware of the issue and Boeing's response. The regulator says it has "increased its surveillance based on initial inspection reports and will take further action based on the findings."