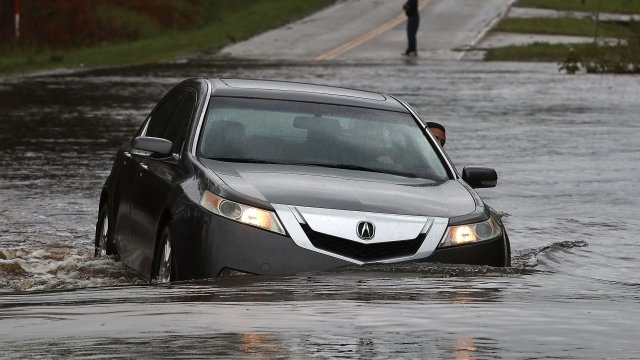 By Katherine Biek
September 17, 2018
At least 17 people have died since the storm made landfall in North Carolina as a Category 1 hurricane on Friday.
SHOW TRANSCRIPT

At least 17 people have died since Florence made landfall Friday in North Carolina as a Category 1 hurricane. It has since weakened to a tropical depression.

Florence has broken the Tar Heel State's record for most rainfall from a tropical storm. The New York Times reports more than 1,000 people have needed rescue from rising floodwaters.

More than half a million homes and businesses in the Carolinas were still without power Monday morning.

The National Hurricane Center reports Florence is slowly picking up speed. The storm was moving north-northeast at 13 mph Monday — up slightly from 10 mph Sunday night. Flash flood watches are still in effect for much of the East Coast.

Officials say Florence could weaken again before "re-intensifying as it transitions to an extratropical cyclone" over the next couple days.