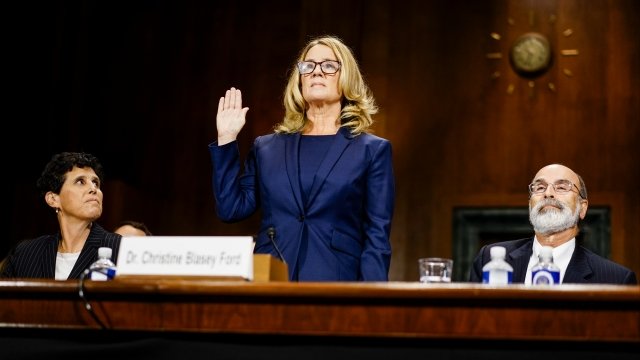 "So what you are telling us is this could not be a case of mistaken identity?" Sen. Dianne Feinstein asked.

Ford's accused Kavanaugh of pinning "her to a bed" and trying to undress her while "grinding his body against hers" back in the early 1980s when the two were in high school.

"I believed he was going to rape me. I tried to yell for help. When I did, Brett put his hand over my mouth to stop me from yelling," Ford testified Thursday.

"You would not mix up someone else with Brett Kavanaugh, is that correct?" Sen. Patrick Leahy asked.

"With what degree of certainty do you believe Brett Kavanaugh assaulted you?" Sen. Dick Durbin asked.

Kavanaugh's denied Ford's allegation that he sexually assaulted her. He's scheduled to testify before the committee Thursday once lawmakers are finished questioning Ford.