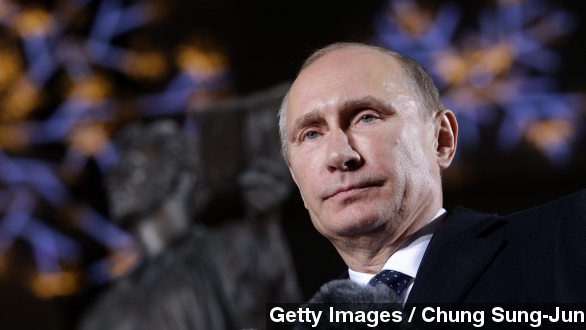 SMS
Forbes 'Most Powerful' List Offers Some Surprises
By Cliff Judy
By Cliff Judy
November 5, 2014
For the second year in a row, Russian President Vladimir Putin topped Forbes' list of the world's most powerful people. President Obama was No. 2.
SHOW TRANSCRIPT

The leader of the free world is not the most powerful person in the world. No, according to Forbes, that title once again belongs to this man.

Forbes published its list of the 72 most powerful people in the world, complete with GIF of the list's No. 2, President Obama, awkwardly looking over at No. 1, Russian President Vladimir Putin.

It's the second straight year Putin took down the Forbes most powerful title.

PETER LAVELLE, RT HOST: "Regularly demonized in the West, he scores high marks among the Russians and other people around the world. What is it about Putin that generates so much interest?"

Granted, that's state-run network RT, but "Putin Phenomenon" isn't much of a stretch.

The man has developed something of a cult status over the years, and it's remarkable that status currently has little to do with being the leader of a country that hosted the Olympics only 10 months ago ... or getting his head put on Hercules paintings. (Video via BBC)

This year alone, Russia annexed the Crimean Peninsula, many argue it's funded and supported the separatists in the conflict in Ukraine, and it struck a deal with China to build a massive gas pipeline. (Video via Euronews and Vice)

As Putin's Forbes profile page notes, "Russia looks more and more like an energy-rich, nuclear-tipped rogue state with an undisputed, unpredictable and unaccountable head unconstrained by world opinion in pursuit of its goals."

The rest of the top five past Putin and Obama rounds out with No. 3 Chinese President Xi Jinping, No. 4 Pope Francis and No. 5 German Chancellor Angela Merkel.

Fed Chair Janet Yellen followed Merkel, marking the first time since Forbes started the list in 2009 that two women made its top 10. (Video via Bloomberg)

"CBS This Morning" anchors couldn't help notice a man much further down Forbes' list, the Sunni militant leader who's caused widespread devastation and massacres in northern Iraq and Syria.

CBS ANCHOR: "ISIS leader Abu Bakr al-Baghdadi is perhaps the most notable of the 12 newcomers on the list. He ranks at No. 54."

Forbes says it bases its rankings on financial resources, the person's scope of power, how they use that power and the number of people they can impact with their decisions.