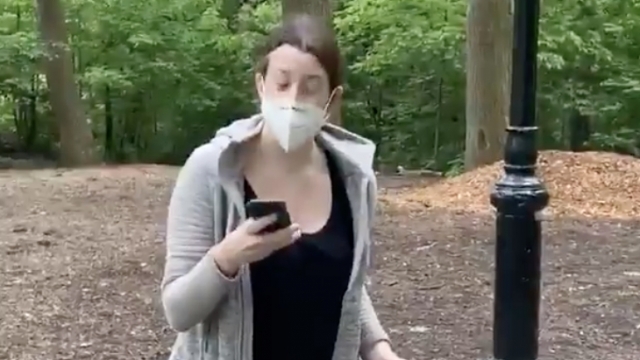 SMS
For Some, Central Park Incident Harks Back To Past Racial Violence
By Jamal Andress
By Jamal Andress
May 26, 2020
For many, these kinds of incidents show how broad assumptions about black men can have awful consequences.
SHOW TRANSCRIPT

It started as a tense exchange between a bird watcher and a dog walker in Central Park. Then it got ugly — fast — and went viral.

“I’m going to call the police.""Please do." "I’m going to tell them an African American man is threatening my life.""Tell them anything you want.”

The bird watcher, Christian Cooper, asked the dog walker, Amy Cooper — no relation — to leash her dog. Dogs are required by law to be leashed in the area of the park where this took place.

“There is an African American man. He is recording me. Please send the cops.”

The cops came, determined that it was a "verbal dispute" and took no other action. Twenty-four hours and more than 20 million views later, Amy Cooper apologized, telling CNN: "I'm not a racist. I did not mean to harm that man in any way.”

But today her employer, the investment firm Franklin Templeton, fired her, tweeting, “We do not tolerate racism of any kind.”

Christian Cooper told our sister station, WPIX, behavior like this is common and has caused plenty of harm in the past:

"It's nothing new. It's nothing we Black folks haven't been dealing with for a long time. I'm sure all of us have stories at one point or another; this is another one. I think it's a little telling in the age of Ahmaud Arbery about the state of things in our country."

Ahmaud Arbery was pursued and then shot dead by two white men while jogging in february. His story captured the nation's attention after a video of the shooting was released to the public in early May.

Michael McBride: "The most dangerous place in America for a black person is in the imagination of a white person."

For many, these kinds of incidents show how broad assumptions about black men can have awful consequences — everything from an ugly dispute in a park to death.

McBride: "What we saw with Ahmaud Arbery, what we saw with Brother Cooper in the park … the through line is, irrational white folk who are too prone to violence when it comes to confronting a body they don't know or they can't control."

For Christian Cooper, this Central Park incident shows how important accountability is, for Amy Cooper and society more broadly.

Christian Cooper: "There were assumptions made about black people, and that goes beyond this one woman, that's a societal issue. That's why there's a Black Lives Matter movement. That's why people are trying to hold people accountable. And unfortunately, in the heat of the moment, she made a poor judgment call and tried to exploit that history to get a desired result, and it didn't work."