For Palestine, There's More To A Canonization Than Sainthood 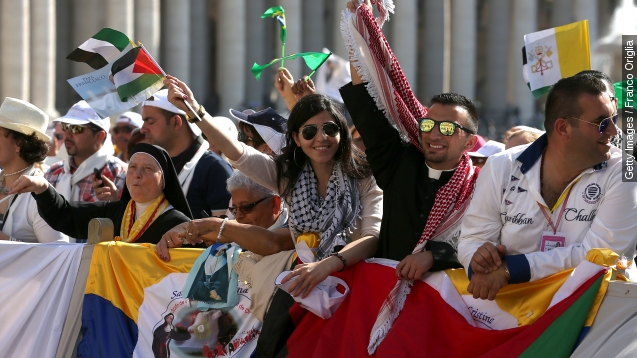 According to Al Jazeera, they are the first Arabic-speaking Catholic saints, and the first modern-day Palestinians to have been canonized.

For the Vatican, the canonization is also a chance to renew its support for the dwindling Christian presence in Israeli and Palestinian regions. (Video via Vatican Television Center)

The BBC reports Christians make up two percent of the population there, a proportion that’s fallen in recent years thanks to emigration and the conflict with Israel.

And for Palestine’s Mahmoud Abbas, the ceremony was a chance to push an agenda.

Abbas lauded the “inspirational message” of the canonization, which “affirms our determination to build a sovereign, independent and free Palestine based on the principles of equal citizenship and the values of spirituality and sublime humanity.”

This comes days after the Vatican recognized the “State of Palestine” on official documents, which lent more support to Palestine’s push for international sovereignty and drew sharp criticism from Israeli officials.

Even more recently, some outlets in Israel have taken issue with Pope Francis’ hailing of of Abbas as an “Angel of Peace” at a meeting ahead of the canonization ceremony. (Video via Euronews)

There is some question as to how accurately Francis’ words were translated. Language experts told Arutz Sheva “Francis actually told Abbas that he ‘may’ or ‘could’ be an ‘angel of peace,’ in an attempt to persuade him to return to peace talks with Israel.”

Regardless of the exact wording, peace is still the Vatican’s end goal. At his Easter address, Pope Francis prayed that “the peace process [between Israel and Palestine] be resumed, in order to end years of suffering and division.” (Video via Vatican Television Center)