For Migrants Waiting In Mexico, Access To U.S. Lawyers Is A Rare Boon 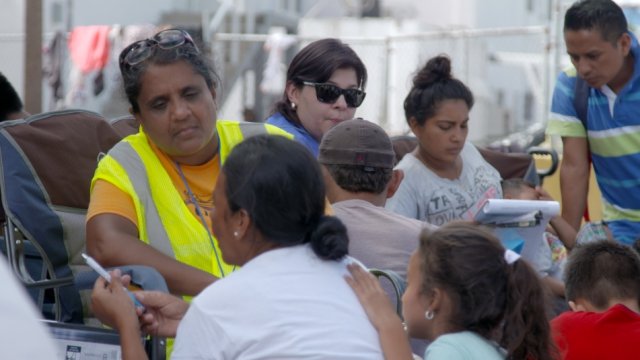 SMS
For Migrants Waiting In Mexico, Access To U.S. Lawyers Is A Rare Boon
By Ben Schamisso
By Ben Schamisso
September 25, 2019
Hundreds of migrants are camping on the streets of Matamoros, awaiting U.S. asylum hearings. Their odds are slim but better thanks to legal workshops.
SHOW TRANSCRIPT

"Gangs killed my sister, my only sister. So we had to run."

"Over there, they only threaten you once and if you don’t agree, they kill you."

"I spent hours in the police station and they hit me in the abdomen and the ribs. And they told me they would make me disappear if I continued being outspoken. So I decided I would leave Cuba."

The Trump administration is forcing more than 42,000 asylum seekers to wait in Mexico, for months, until the resolution of their U.S. immigration cases. The White House says having asylum-seekers wait in Mexico ensures they don't disappear into the U.S. before a judge denies their claim. But immigrant advocates say the migrants are left to fend for themselves in dangerous border towns — with difficult access to American lawyers.

"In the U.S., we protect five classes of people, that's it. I want you to learn them: race, religion, political opinion, nationality or belonging to a social group."

Now, the migrants who understand how to prepare for their day in court have an invaluable advantage. And that's not lost on a group of U.S. pro-bono lawyers who's been crossing into Matamoros, Mexico, on weekends. They've been holding asylum workshops ever since American officials started returning migrants there in July.

"Our goal here today was to tell them to calm down that yes, asylum has been banned for people who had, you know, pass to other countries. But there are two other methods of protection."

Under a new policy, migrants cannot even apply for asylum unless they have already been denied refuge by another country they passed through on their way to the U.S. However, they can still obtain other protections if they can prove there's a high chance they'd be persecuted or tortured in their home countries.

"A lot of the cases that we're seeing right now that are the strongest cases are people that are opposed to the government, have refused to participate in certain government activities. And because of that they were targeted. They were detained by officials, they were harmed, and then based on that they fled."

"So we're honest, we let them know these are difficult. But at the end of the day, I think our role is to give them all of the information they need, so that they can make a decision based on complete, not incomplete information."

The Trump administration says asylum laws are not meant to protect "private violence," such as gang and domestic violence. It also blames the Obama administration for being too permissive with such claims, creating a "powerful incentives" for people to "come here illegally and claim a fear of return." The White House has also long complained about "those who seek to exploit the asylum system."

But lawyers in Matamoros tell migrants that lying is the worst thing they can do. Besides, they also encourage them to gather evidence to back up their stories.

"All the cross-examination by ICE attorneys, any little thing, any inconsistency, they really hone in on that. And if you're lying, it will come out. And if you're caught in a lie, you will get deported. So we're very clear that you always have to tell the truth."

Only 1.5 percent of all migrants currently waiting in Mexico have found a lawyer to represent them in court, according to immigration court data analyzed by Syracuse University. Lawyers say that's because of security and logistical issues. The U.S. State Department warns against traveling to Matamoros "due to crime and kidnapping."

"Which lawyer can come across the border and have the time and the energy, the security issues?"

"We know that when it's dusk, we've got to head back. And if we're not ready to head back, our team leader will grab us and take us back across the bridge because it is such a liability to be here."

Yet, the migrants who participated in the workshops said they feel empowered by the legal knowledge they gained.

"The workshops are very good. Inside the immigration system in the U.S., nothing is in Spanish. It’s all English and they say sign here and you don’t know what you’re signing."

"Many of us have never been to court and so we don’t know what we need to show. They explain how everything is and how we need to form our story so that they’ll understand and tell us us yes or no as quickly as possible."

And what if the immigration judge says no? Many asylum seekers have started planning for that very real possibility.

"In Cuba, the situation is very, very hard. And I think it is going to get worse every day. If we can't get to the USA, we are we're going to stay here."

"I don't know if I will want the asylum in Mexico, to be honest. I see armed men around here in Matamoros all the time. People tell me they're from the cartel. They tell me not to be out much and to not talk much because of my accent. Because they kidnap undocumented people and ask their family for money. My mom’s is in the U.S., so they ask families for money."

"If they tell me go back to Honduras, I’ll go back because my country is waiting for me."

Now in a few weeks, they'll present their cases to an American immigration judge inside of a new and temporary tent court that's closed to the public. But they won't hear a final decision until their second or third hearing, which means they could be staying here in Matamoros for a few more months.