For Heart Attack Survivors, It's Risky To Exercise Too Much 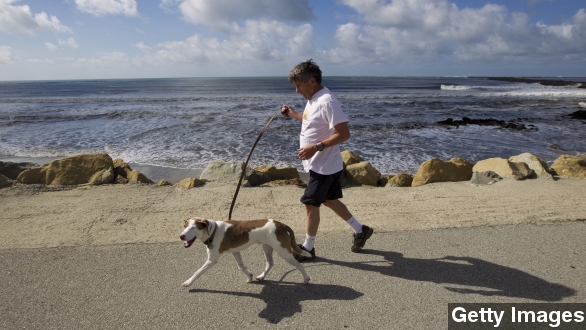 SMS
For Heart Attack Survivors, It's Risky To Exercise Too Much

By Steven Sparkman
August 13, 2014
A new study says, while exercise can help strengthen the heart after a cardiac episode, the benefits vanish when you do too much.
SHOW TRANSCRIPT

If there's anything the average person knows is supposed to prevent or treat heart disease, it's regular exercise.

For anyone worried about their ticker, the answer has usually involved some form of "Get out there and get moving!" — even for those who've already had a heart attack.

Johns Hopkins tells survivors: "​Exercise can be a frightening proposition in the aftermath of a heart attack. ... But recent research indicates that a reasonable amount of regular exercise is the best way to strengthen the heart after a heart attack."

But, like most things, moderation is key, and a new study says some heart attack survivors take it way too far.

KOVR: "Researchers say survivors who ran more than 30 miles or walked more than 46 miles per week are overusing their heart and increasing their risk of death."

The research, conducted at the Lawrence Berkeley National Laboratory, found that, yes, exercise does reduce a heart attack survivor's risk of another episode to a point, but the benefit disappears for people who take it to extremes.

The 30-mile-per-week mark shouldn't be too surprising, though. We've heard it before as the threshold where the benefits of running start to disappear, even for people who haven't had heart attacks.

Earlier this summer, The Wall Street Journal, citing new research, dubbed breaking the 30-mile limit "the exercise equivalent of a cheeseburger" in terms of its effect on the heart.

CBS: "Those people have also a higher risk of having heart problems. So the people who are at the two extremes — nothing at all or too much — had heart problems."

But that's not something most of us will have to worry about. Very few people are marathon or ultramarathon runners — or even regular runners.

In fact, one of the key figures on the subject of over-exercise, cardiologist and former endurance athlete James O'Keefe, says as many as half of Americans might be getting too little exercise, compared to the estimated 5 percent getting too much.