For Dwyane Wade And Other Free Agents, It's All About 'Home' 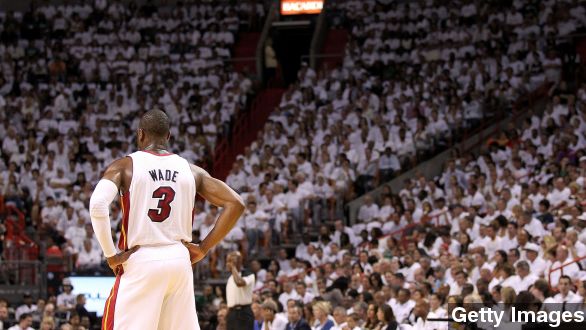 SMS
For Dwyane Wade And Other Free Agents, It's All About 'Home'

By Matt Moreno
July 15, 2014
Whether it's LeBron and Cleveland, Carmelo and New York or Dirk Nowitzki and Dallas, a sense of "home" is a big deal to free agents right now.
SHOW TRANSCRIPT

Just like LeBron, Chicago-born Dwyane Wade is also deciding to return home ... to the Miami Heat. (Via Getty Images)

After reportedly signing a deal to head back to the Miami Heat Tuesday, Wade posted on Instagram, "Home Is Where The Heart Is... My Home,My City,My House..#HeatLifer"

Okay, so it's not exactly Wade's birthplace, but it's been the guard's home for all of his 11 years in the league. And it seems being close to home is a big deal to the NBA's top free agents.

Shortly after, Wade released a statement through the Associated Press about LeBron's choice, saying in part "​LeBron made the right decision for him and his family because home is where your heart is" — something Wade echoed in that Instagram post. (Via Getty Images)

And Wade and James aren't alone in wanting to go or stay in the places they call home.

Also Tuesday, German-born player Dirk Nowitzki decided to stay with the Dallas Mavericks — the same team he's been with since he came to the NBA as a 20-year-old in 1998. He reportedly signed a three-year deal. (Via Getty Images)

Which means, according to CBS Sports, three of the top four NBA Free Agents (James, Anthony and Nowitzki) are staying at or going to their respective "homes," making this once wild NBA Free Agency period not so wild. Maybe they're all taking a page out of LeBron's column where he wrote.

While the terms of Wade's deal are unclear, Wade's Instagram post and the media's speculation both hint that he's likely to stay with the Heat until he retires.

And an article from the Miami Herald in 2013 said he was in for "the long haul" with the Heat, quoting him as saying "Everybody knows where I want to be. I want to be in Miami."

The Miami Heat have also added Luol Deng and Danny Granger from free agency so far.