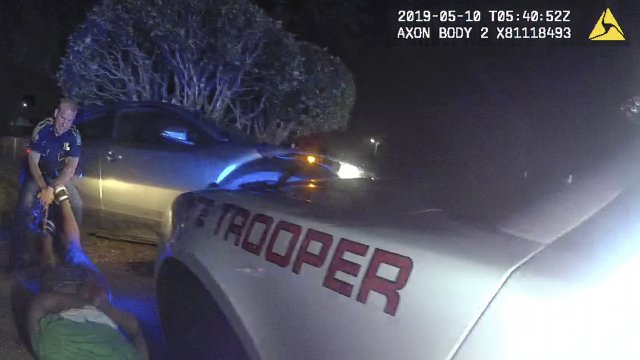 SMS
Footage Of Man's Arrest Released 2 Years Later
By Eliana Moreno
By Eliana Moreno
May 20, 2021
Ronald Greene was stopped by troopers in Louisiana in May of 2019 after leading them on a high-speed chase.
SHOW TRANSCRIPT

The Associated Press has obtained body camera footage of the moments leading up to the death of Ronald Greene.

Greene was stopped by troopers in Louisiana back in May of 2019 after leading them on a high-speed chase.

In the video, you can see officers drag the man out of the vehicle and force him to the ground. Greene is heard yelling that he's sorry and that he's scared. The officers punched him, Tased him and yelled profanities at him. The video shows a trooper stomping on Greene as he's handcuffed on the ground. Instead of helping the bloodied man, the troopers instead use sanitizer wipes to clean his blood from their own bodies.

Troopers initially told emergency room doctors that Greene died from crashing into a tree and did not mention that they beat him.

The Associated Press obtained medical records that show the doctor wrote the story troopers told "does not add up."