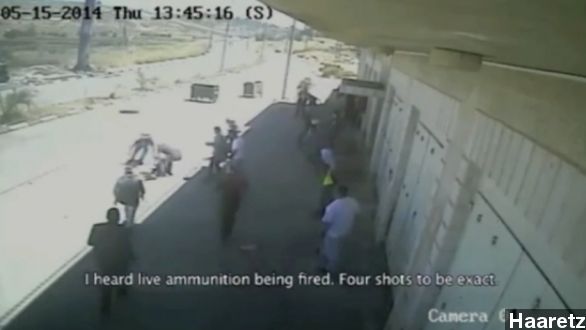 By Zach Toombs
May 20, 2014
Two Palestinian teens were killed by Israeli soldiers during a protest, and a new video suggests the teens weren't posing a threat at the time.
SHOW TRANSCRIPT

Security camera footage shows two unarmed Palestinian teens falling to the ground during a protest, and human rights groups are pointing to the video as evidence of unlawful shootings by Israeli soldiers.

Here's the footage allegedly showing the shootings of 17-year-old Nadeem Nawara and 16-year-old Mohammad Salameh. Israeli forces previously said they posed a lethal threat, though the video shows them without weapons or even stones to throw. (Via Haaretz)

The footage backs up eyewitness accounts of the shootings given to The Guardian. Onlookers said the teens were at least 200 meters from Israeli forces, walking by themselves during a lull in a protest, when they were shot through the chest.

The footage has been heavily publicized by B'Tselem, a group that gives cameras to Palestinians to help document human rights abuses.

Both the United Nations and the U.S. State Department have publicly asked Israel to conduct a transparent investigation into the shootings.

But Israel's government has pushed back. The nation's defense minister suggests the footage was doctored and says, "It was a life-threatening situation, so the officers acted accordingly." (Via Jewish News One)

But Tuesday, an Israeli defense spokesman did open up a bit while talking to The Guardian, saying the new claims mean "there are questions to be cleared up."