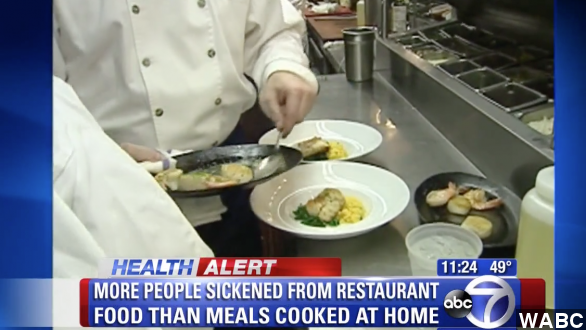 Those who choose to dine out rather than in might want to give that a second thought. A recent report claims you are more likely to get sick from food prepared at a restaurant than at home.

Researchers from the Center for Science in the Public Interest looked at data from almost 4,000 food poisoning cases over 10 years. They say nearly double the amount of outbreaks were caused by foodborne illnesses from restaurants than private homes.

That includes sicknesses caused by the most common contaminants: E. coli, salmonella, hepatitis A, botulism and listeria.

The researchers say they also found a 42 percent drop in the number of outbreaks reported since 2002. It's important to note that doesn't mean food poisoning cases have decreased over the years.

According to one of the researchers, underreporting has "reached epidemic proportions," and not being able to investigate any outbreaks prevents health officials from "[shaping] food safety policy and [making] science-based recommendations to consumers." (Via Center for Science in the Public Interest)

But among the food poisoning cases that have been tracked back to the source, more than double the illnesses occurred from FDA-regulated food such as fresh produce, seafood and packaged food — not meat or poultry regulated by the USDA. (Via WABC)

The report notes the Food Safety Modernization Act signed into law in 2011 was supposed to allow the FDA to conduct more inspections on food-processing facilities, but lack of funds has stalled the agency's efforts.

And as a measure to combat the increasing number of food poisoning cases, the CDC began gene mapping to monitor different strains of harmful bacteria — a process called advanced molecular detection.