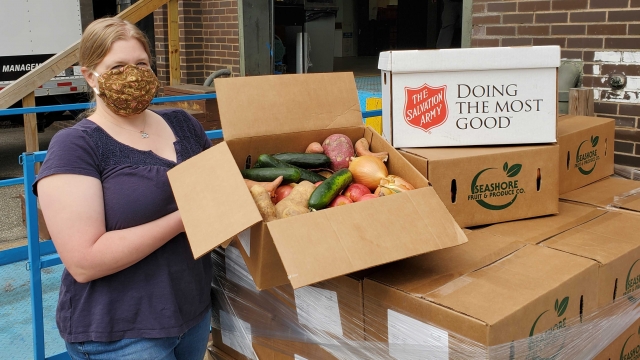 "I heard about, you know, hunger and food, waste and all that. But I really wasn't experiencing it.’

Bill Campbell is one of approximately 25,000 volunteers that works with Food Rescue Hero, an organization that uses a smartphone app to coordinate deliveries of unused foods from restaurants and grocers to non-profits and community centers.

Since 2016, Food Rescue Hero has redirected more than 48 million pounds of food to those in need. Campbell himself has completed 455 food rescues since joining as a volunteer in September 2019.

"At the time I was updating my technology. You do need to have the technology to to do this effectively. You get the app, you get a little bit of training and you go out and you do it," Campbell said.

"The largest cohorts in the week are early retirees. So the technology is very easy to use. It doesn't come with a manual, just like any app we have. We just instinctively know how to use it," said Leah Lizarondo, CEO and co-founder of Food Rescue Hero.

Lizarando told Newsy she recognized a majority of our food waste happens at home, but wanted to find an easy way to connect retail food suppliers to volunteer drivers to provide a cost-efficient way to move food that would otherwise be thrown away.

"Our homes are about 43% of where our food waste happens. Retail is about 40%. The problem there is that the instance of food waste at each location is relatively small, like if you can imagine a bagel store in a typical bagel store, it's about two bags of bagels a day. To deploy one truck to go with like two bags of food is just going to cost too much," Lizarondo said.

During the pandemic the group saw app use skyrocket. It’s being used by over 300,000 Canadian businesses to connect with 2,700 nonprofits.

"A lot of businesses were looking for a national solution for food recovery, as we learned at that time. And then non-profits being available in every province were able to join and and potentially rescue food in their communities. We took a long time to design the app and we actually built a proof of concept and then launched a second edition that is set to scale nationally," said Veronica Summerhill, Director of Product Development at Second Harvest.

Volunteers for Food Rescue Hero told Newsy that the program has been important to help them stay connected to their local communities, especially during a pandemic

"One of the rescues that I like to do on a weekly basis, I pick up at a restaurant, I take it up to this Baptist church, and there's a woman there, Debbie, who's there every week. There's like a community there of people — she's the hub — And then all these people come in. So I've created a new community out of the pandemic," said Lorien Benet Hart, volunteer at Food Rescue Hero.