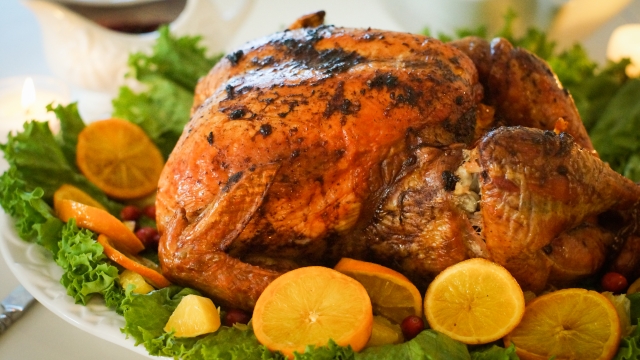 As Thanksgiving approaches, inflation isn't the only reason the holiday dinner may be more expensive this year.

Though gas prices have fluctuated, food costs have remained consistently high, making budgeting for this year's Thanksgiving dinner a challenge.

Food prices are up more than 12% overall from a year ago. The most recent Consumer Price Index shows the increases range from 8% for meat, poultry and eggs to nearly 16% for cereals and bakery products.

Pandemic disruptions, the war in Ukraine affecting energy costs and wheat exports, fertilizer and feed costs and drought have all contributed to rising grocery bills.

It's affecting how some shoppers are planning the holiday meal.

"Probably asking other family members to bring things instead of providing everything for everyone; everyone does a little bit," said Ashley Harris, a grocery shopper.

How did this fruit end up becoming such a Thanksgiving staple?

Consumers are also changing the way they shop. Market researchers say there's been a significant shift toward discounters like Aldi and Trader Joes.

But no matter how careful the shopper, there are factors beyond their control.

The outbreak of avian flu has killed about 49 million turkeys and other poultry this year. The American Farm Bureau found a 20% increase in turkey prices last month, but now many grocers are discounting them.

Walmart is advertising turkeys for less than a dollar per pound and keeping ham, stuffing and potatoes at last year's prices. Kroger and Lidl are also offering discounts, and Aldi is rolling back prices to 2019 levels.

Despite discounts, some people are just not making turkey the centerpiece of the meal this year.

"You don't necessarily have to have that bird on the table; you can enjoy other things and have a great dinner," said Erik Neimanis, the head butcher at Meatland Market.

Experts say other ways to save are to avoid buying expensive prepared foods, homecook the sides, and keep the menu flexible to take advantage of more pop-up sales.

You can’t stop food shopping, and you can only cut so many corners while keeping your family healthy. Here are some apps to save on groceries.