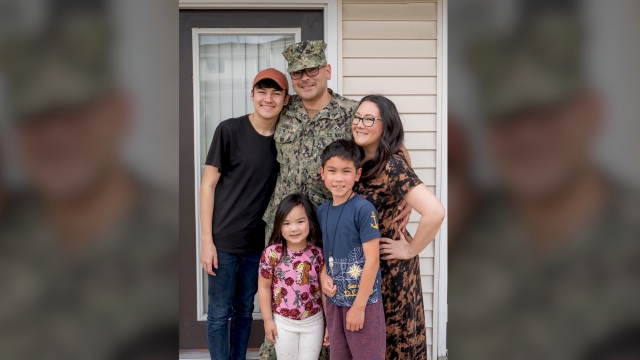 A bureaucratic oversight is costing thousands of military families critical benefits to keep them from going hungry, especially in high-rent cities.

On the surface, life in sunny San Diego looks picture-perfect.

But behind closed doors, it's a more complicated story for thousands of military families based here.

Lisa Javinar's husband Teddy enlisted in the Navy later in life, after losing his job with a cell phone company. He's an electronics technician with the rank of Petty Officer Third Class.

"It's something he's always wanted to do," Lisa said. "Very proud of him."

In 2020, the same year he joined the military, a survey by the military spouse organization Blue Star Families showed 14% of active duty enlisted families reported low or very low food security. The lower the rank, the higher the threat of hunger.

"I applied for SNAP benefits before he left for boot camp," Lisa said.

SNAP stands for Supplemental Nutrition Assistance Program. It's a federal program to help with food costs.

Initially, Lisa was told their family of 5 qualified for SNAP benefits worth more than $500.

But then, a USDA representative called her back, saying there was a mistake and Petty Officer Third Class Javinar, who brings home about $2,000 monthly, earned too much, by about $5 a month.

"It was a huge relief, you know, and then for her to call back and say that she had made a mistake," Lisa continued. "And that we weren't going to have that help after waiting over a month for, you know, to hear back even and then to be told that we didn't qualify."

Here's why: Some military families that live off base get a Basic Allowance for Housing, also known as BAH. It's taken out of their check before they even see the money. The amount depends on where they live. In places like San Diego, it's high.

But one section of the USDA SNAP benefit rules says all income should be included when determining SNAP eligibility. And the housing allowance is not explicitly on the list of exceptions.

In other words, even though the housing money is a military benefit to help service members live near bases, it's still counted as income. So as far as the government is concerned, military families like the Javinars appear to have a lot more money on paper than they actually do.

It's a bureaucratic oversight costing thousands of military families critical benefits that can keep them from going hungry, especially in high-rent cities like San Diego where the value of housing can easily put them over the top.

That's certainly the case for the Javinars. It costs a lot to feed two adults and three children ages 17, 10 and five.

In tight months, Lisa, like thousands of other military families, helps feed her family by joining a line that is the military equivalent of a food bank.

"It's lines and lines of cars," Lisa said.

This event, hosted by the Steven A. Cohen Military Family Clinic, is just one of many.

The food assistance group feeding San Diego provides much of the food. It's a safety net the Javinars are grateful for.

"But then there's also in the back of my mind, where I'm like, 'Did I budget properly? Did we spend money on something we shouldn't have this month?' And I don't want to take from someone else that really needs it," Lisa said.

To make matters worse, it's hard for military spouses to get a job. There's a childcare issue, frequent moves and an unpredictable schedule.

"It would be huge getting SNAP benefits," Lisa continued.

So what's causing this oversight? Newsy had to fly to Washington, D.C. to find the answer. And as we learned, the people who work in this building have the power to fix this, but it won't be quick.

Josh Protas, with the nonprofit MAZON: A Jewish Response to Hunger, started working on this problem almost a decade ago.

"We got involved in what should have been a very simple and easy policy fix that has been incredibly stubborn to get over the finish line," he said.

Protas says his organization pushed for a fix in the 2018 Farm Bill, which covers the SNAP program, but it didn't make the final bill.

"Despite bipartisan support for helping struggling military families, Congress just didn't prioritize this to make that change," Protas continued. "Because it costs money."

Report after report highlights the problem.

The fight is personal to Sen. Tammy Duckworth, a U.S. Senator from Illinois and a retired Army National Guard Lieutenant Colonel.

"As a child, I was hungry. My family relied on SNAP benefits for a time," she said. "I remember being a young lieutenant and going out to eat and my enlisted men couldn't afford to eat."

But here, there's another catch. The NDAA won't be implemented until January 2023.

The defense spending bill does allow the Secretary of Defense to make exemptions for areas with a high cost of living, but it's not clear what that will look like.

"Whether this is in Tampa, Florida, where you have central command, you take it to Washington, D.C., take you just name any major metropolitan area that has military installations around it, and they're going to be equally affected," said Bob Kamensky, chief strategy officer for Feeding San Diego.

"Hiding from the problem doesn't solve the problem," Duckworth said. "And the best thing that we can do is to make sure that our military men and women have access to the benefits that they deserve. And if they need the extra help, that they get the help that they need."

In another attempt to fix the bureaucratic mix-up, Sen. Duckworth and Alaska Sen. Lisa Murkowski introduced a bill to stop the Basic Housing Allowance from being counted as income for SNAP eligibility.

It's been tried before.

"Unfortunately, we've been following this issue for too long," Murkowski said.

"There is bipartisan support," Duckworth said. "And you know, sometimes you gotta try two or three or four times before it passes, but I'm going to keep trying."

The two senators introduced the latest bill in March. Eleven other senators signed on as co-sponsors. Murkowski is the only Republican so far.

NEWSY'S MARITSA GEORGIOU: Why has it taken this long to do something?

ALASKA SEN. LISA MURKOWSKI: It's a good question. And it's a fair question. And you know, maybe it's something that we don't want to acknowledge — that our military families are financially strapped and stressed.

"Our federal government has abdicated responsibility for this," Protas said. "Fortunately, there are some positive steps forward, but they're not immediate. And so for hungry military families right now, the question is: What do they eat? What are they going to put on the table right now?"

It's the same question the Javinars have back in San Diego.

"We know what we signed up for," Lisa said. "It doesn't make it any easier. It's still difficult. And so to have to deal with all of that and have to worry about how we're going to feed our families. I mean, it's just it would be awesome to not have that extra stress."

"We ask so much of our military families and in return, we're not keeping up our end of the bargain to just help them meet their basic needs so that their families can grow and thrive and reach their full potential. It's shameful," Protas said.

And while they wait for Congress to finally act, families like the Javinars are still stuck in the trap — serving the nation and paying the price.