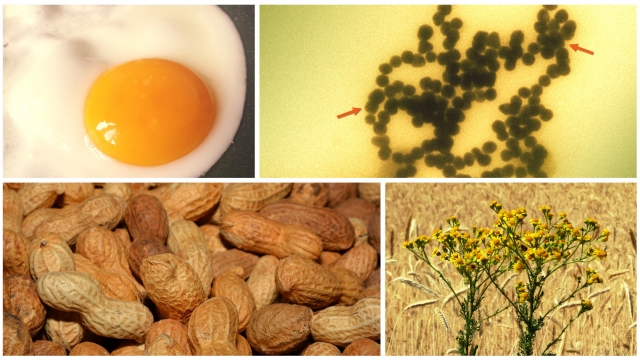 SMS
Food Allergies Could Soon Be Turned Off By Tiny Bits Of Plastic
By Steven Sparkman
By Steven Sparkman
April 18, 2016
A new way of smuggling ragweed, peanut proteins or other allergens past the immune system could finally teach our bodies not to overreact.
SHOW TRANSCRIPT

Scientists are getting better at sneaking tiny pieces of metal or plastic past our immune systems and using them to treat serious health problems.

In a new study, researchers at Northwestern University may have found a way to use these nanoparticles to cure any allergy you can think of.

The scientists were able to take mice that were allergic to eggs — so much so they would have an asthma attack when exposed to egg protein — and stop the harmful reaction after one treatment.

There are two reasons it worked: The first is that the nanoparticles were specially made to fly under the radar of the immune system. The second is that they actually had the egg proteins hidden inside.

By smuggling the allergen into the body without setting off the alarm, the mice's immune systems learned that egg protein isn't so bad after all. The same trick could potentially end any allergy.

The researchers are already testing it on mice that are allergic to peanuts. In humans, that's one of the deadliest food allergies.

What's more, the nanoparticles are already on their way to human trials after they were shown to also treat multiple sclerosis, which is also an immune disorder.

This video includes clips from Northwestern University and images from Ken Bosma / CC BY 2.0, CILAS / CC BY 3.0, the U.S. Food and Drug Administration, Pezibear / CC0 and Pixalli / CC0.