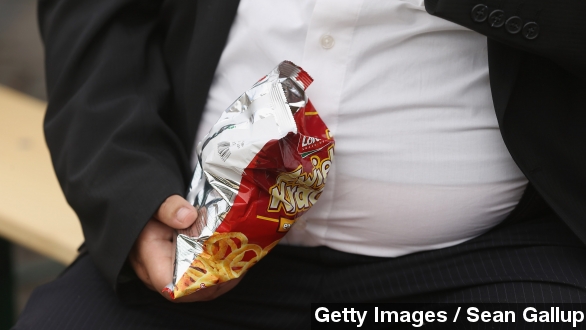 According to new research, women with post-traumatic stress disorder are three times more likely to develop a food addiction.

The study showed that women who showed the most symptoms of PTSD were likely to turn to eating as a method of coping with that trauma.

49,000 female nurses between the ages of 25 and 42 were examined for the research, published in the journal JAMA Psychiatry on Wednesday.

10 percent of those women were showing 6 to 7 symptoms of PTSD and 18 percent of that group also showed signs of a food addiction. That's almost three times as much as women who did not have PTSD.

Common symptoms of food addiction include frequently eating despite not being hungry, feeling sluggish or fatigued from overeating and having physical withdraw when cutting back from certain foods.

It's important to note, not all health experts agree that food addiction is a real thing.

A Cambridge University professor of health wasn't convinced by available research when he told The Guardian: "We are finding that 'addiction' is a handy term to be applied to lots of human behaviors now: sunbed addiction? Facebook addiction?"

But one doctor says this study is a major step in validating food addiction, explaining that these latest findings prove it is brought out by trauma and PTSD.

But the research did not determine if food addiction developed after PTSD symptoms and so, as LiveScience points out, it cannot be directly proven that PTSD leads to food addiction.

Other studies, such as this one published in Psychology Today, have also found people who have experienced trauma are more likely to overeat.

One health official explained to DailyRX News why people with PTSD might be more prone to food addiction; "Food can be used as a substitute for the inner healing needed, but it is never sufficient and this can lead to food addiction in an attempt to soothe inner pain."

In the future larger groups of people will be studied to see if a link between overeating and PTSD holds up in a broader sample.