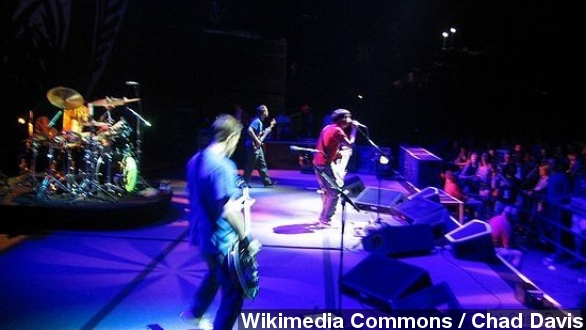 The Foo Fighters say they'll be playing an upcoming show in Richmond, Virginia. But this isn't your average concert. This show was completely organized and funded by fans.

It all began a couple months ago when Richmond Foo Fighters fans began brainstorming ways to bring the band to town. (Via YouTube / Foo Fighters)

The fans, headed up by self-proclaimed megafan Andrew Goldin, launched a Crowdhoster site with the goal of selling out a Foo Fighters concert that didn't yet exist. (Via Foo Fighters Richmond)

"We need a Foo Fighters rock show in Richmond, Virginia this year. We're selling 1,400 tickets to a concert to be held somewhere in Richmond at some point in 2014." (Via YouTube / Andrew Goldin)​

Rolling Stone reports this week the fans had surpassed their goal of raising $70,000 for the concert.

So, once that the funds were raised, the show was on, right? Well, actually, they still had to get the band to agree to come.

Although the band now seems to be on board, an exact date and time has not yet been announced. The Crowdhoster site reads, "The plan is for the show to take place in Richmond, VA sometime in 2014. Stay tuned for exact details." (Via Foo Fighters Richmond)​

This will be the first time the band has played in Richmond in more than 15 years.