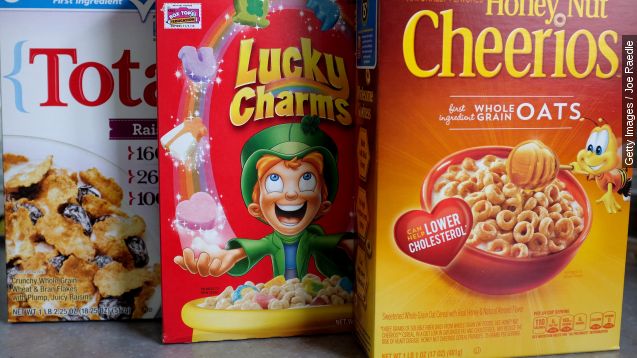 "We're embarking on this journey to update our recipes in our cereal products and to remove artificial flavors and artificial sources of color," said a General Mills representative in a video.

Cereal giant General Mills announced Monday it would be making some big changes. The company pledged to remove all artificial colors and flavors from the remaining 40 percent of its cereal products that still have those items.

The company has a history of focusing on key ingredients. In 1930, the company began adding vitamins and nutrients to cereal. And in 2005, it launched a major campaign to beef up its products with more whole grains.

According to General Mills, teams have been working to replace chemically created colors and flavors with spices, fruits and vegetables. For instance, Reese's Puffs will now be flavored with natural vanilla.

The company said the change is a result of consumer preferences. A 2015 Nielsen report found more than 40 percent of people said an absence of artificial colors and flavors is important when purchasing food.

It's a trend many restaurants and food chains are following, too. Kraft, Nestle, Pizza Hut, Taco Bell, Panera and Subway have also put the axe on artificial ingredients in recent years.

For General Mills, Reese's Puffs and Trix are up first for renovations. The marshmallows in Lucky Charms, however, are proving to be a bit more difficult to alter. The company said changes to that cereal will begin next year.

General Mills plans to have its entire updated cereal stock on grocery store shelves by the end of 2017.

This video include images from Getty Images and music from Broke for Free / CC BY NC 3.0.