Foie Gras Is Back In Calif.: Chefs Ecstatic, PETA Furious 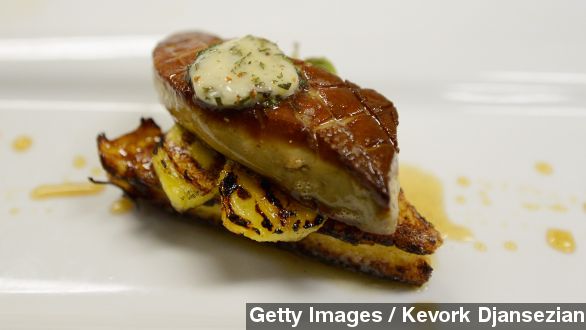 The decision was praised by area chefs and people who enjoy the popular cuisine while upsetting animal rights groups.

So, why all the controversy?

Well, foie gras is a popular French delicacy that typically winds up on the menu at high-end restaurants. Many foodies love it, but it's how the product is made that causes such a stir. And we warn you, the video you are about to see is graphic. (Video via KNBC)

A duck or goose is force-fed on purpose in order to fatten its liver — the part that's eventually prepared, cooked and served up for the dish. (Video via KGO-TV)

According to Los Angeles Times, in his decision, the judge sided with a handful of restaurants in California and New York that challenged the ban recently.

He ruled federal law allowing the sale of foie gras and other poultry items overrides the law California put in place back in 2012. And area chefs are ecstatic to say the least. (Video via KTTV)

Upon hearing the ruling, one Napa Valley chef told the Times, "I've been jumping up and down for about 90 minutes."

And another culinary expert even compared his new-found foie gras freedom to the way alcohol was legalized at the end of Prohibition.

Meanwhile, animal rights groups were furious with the judge's decision.

They say the force-feeding process is cruel to birds, unnecessary and some activists say they plan to protest establishments that serve the product. (Video via KCBS)

The president of the animal welfare group PETA told the New York Times:

"Foie gras is French for fatty liver, and fathead is the American word for the shameless chefs who actually need a law to make them stop serving the swollen, near-bursting organ of a cruelly force-fed bird."

Still, another California chef told KTVU the same argument could be made against other meat products.

"I would think that you could apply this same microscope to any animals raising: the chickens, commodity-fed beef, et cetera," one California-based chef told KTVU.