Floyd Mayweather's Entrances And Entourages Over The Years 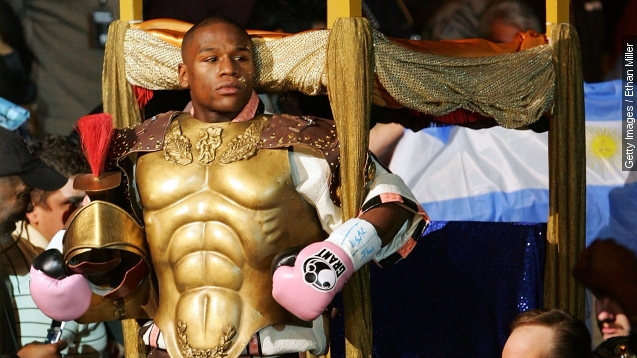 Floyd Mayweather says his match against Andre Berto will be his last, which means he'll be making his final entrance. The successful and perennially controversial boxer has always been a showman and come fight night, the question isn't "Who's going to win?" but rather "How's Mayweather going to enter the ring?"

Mayweather rode in on a chariot and dressed as a Roman gladiator before his win against Carlos Baldomir in 2006.

He went a different sartorial direction in 2007, donning a sombrero before his split decision win over Mexican-American boxer Oscar De La Hoya.

And when it wasn't his entertaining outfits, it was his entourage of entertainers. Over the years, Mayweather has been flanked by Justin Bieber, 50 Cent and Triple H when entering the ring. In 2014, Lil Wayne rapped alongside Mayweather, which could've been a call back to Method Man's pre-fight performance in "The Great White Hype."

Still, one of the more head-scratching appearances was the Burger King, who showed up behind Mayweather before his fight against Manny Pacquiao earlier this year.

ESPN's Darren Rovell says Burger King reportedly paid around $1 million to have their mascot stand with Mayweather. But before you facepalm at that figure, keep in mind the burger chain got at least a week's worth of publicity — and we're still talking about it.